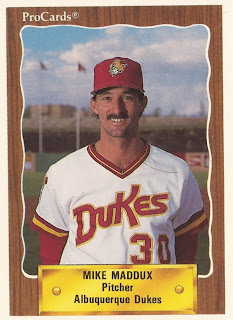 Mike Maddux had a rough rookie year in 1986 for the Phillies, The Philadelphia Inquirer wrote. But, for six innings in September, he threw one-hit ball and picked up his third win.

"He went out tonight totally prepared to pitch," Phillies manager John Felske told The Inquirer. "He was a different guy out there. He was confident. He was determined to do well. He really threw some outstanding breaking balls."

Maddux went on preparing to pitch in the majors over a total of 15 seasons, pitching in the bigs through 2000. Maddux has went on to help other pitchers prepare for their outings as a pitching coach, first at AAA, then in the majors.

In 2011, Maddux helped Texas Rangers pitchers prepare for the World Series, for the second season in the row.

Maddux' pitching career began in 1982, taken by the Phillies in the fifth round, out of the University of Texas at El Paso. Maddux played that first year at short-season Bend. He made AA Reading in 1983, then first hit AAA Portland in 1984. He hit Portland full time in 1985.

Maddux made his major league debut in June 1986. In 16 starts, Maddux went 3-7, with an ERA of 5.42. That September outing, where he threw six one-hit innings, followed another outing where he didn't get a single out. In that game, he gave up three hits and three earned runs before being pulled.

Going into 1987, Maddux had a new pitch to throw, taught a change-up by his brother Greg Maddux, The Inquirer wrote. A sore shoulder, though, kept Mike Maddux from Philadelphia until August.

Maddux got into just seven big league games that year. In 1988, he got into 25, picking up four wins. One of those wins came in an April relief appearance, the same day as his brother picked up a win for the Cubs. Another came against his brother, a 6-3 win in July over the Cubs.

Maddux stayed with the Phillies through 1989, when he was released. For 1990, he signed with the Dodgers, starting the year at AAA Albuquerque. He got just 11 games in Los Angeles. His time at AAA that year, though, was his last time of any significance there.

For 1991, he signed with the Padres. A late spring outing, where Maddux just worked to make the squad, picking up a win in four innings of relief work. ""It was a fantasy, yeah, to come in and open some eyes," Maddux told The Los Angeles Times after that outing. "Hopefully, that's what's happened."

Traded to the Mets for 1993, Maddux knew his role. And that role was wherever he was needed, he told The New York Times.

"I call myself a utility pitcher," Maddux told The NY Times after the trade. "I had early entries last year, late entries. I did everything but play the infield."

Maddux stayed with the Mets through 1994, starting 195 with the Pirates before joining the Red Sox. In July, Maddux returned to starting, filling in for an injured Roger Clemens.

He lasted into the sixth inning, while giving up only two hits. It was an outing that got him again compared to his brother.

"I kept yelling at him that his name was Mike, not Greg," the Rangers' Otis Nixon told The AP. "He was tough."

Maddux continued pitching through 2000, going through Seattle, Montreal, Los Angeles and then finally Houston. He pitched his final game July 4. Soon after, he was named pitching coach for the Astros' AA team at Round Rock.

Maddux stayed with Round Rock through 2002, before joining the Brewers as their big league pitching coach in 2003. In 2009, Maddux joined the Rangers in the same position.

Maddux and Rangers owner Nolan Ryan shared a philosophy on pitch counts, that they're not absolute, The NY Times wrote in May 2009.

"Guys that train for a mile ain't running more than a mile," Maddux told The NY Times then. "That's kind of my take on it. Go out there and go as long as you can, and the hitters will let you know when you’ve had enough."