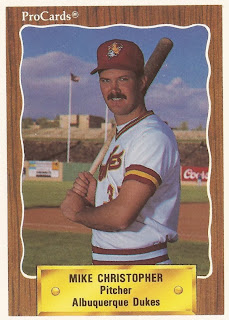 Called up for the first time in two seasons, Mike Christopher's return to the majors was not at all like his last trip. This was July 1995 and Christopher was now carried with him the label as a replacement player.

Helping ease the transition were Christopher's first two relief appearance, getting wins in both.

"I've been in the right place at the right time," Christopher told the Associated Press. "My job here is to give the team one inning and put them in position to win the game."

But it wasn't the same for other members of his team, namely, Cecil Fielder, an outspoken member of the union during the strike.

"We may be on the same team," Fielder told reporters after Christopher arrived, "but we're not teammates."

Christopher's pro career began 10 years earlier, taken by the Yankees in the seventh round of the 1985 draft. He bounced around the Yankees' system for five seasons, first making AA Albany-Colonie in 1986 and making Columbus in 1989.

Christopher got the first promotion to Columbus in May, after posting a stellar 1.03 ERA. He made the move with teammate Kevin Mmahat.

"Those two are quality kids, and that's what it's all about," Albany-Colonie manager Buck Showalter told the Schenectady Gazette. "If you get a phone call like that and you feel bad, you need to reevaluate your priorities."

Christopher left the Yankees system for 1990, taken by the Dodgers in the minor league draft. He stayed with the Dodgers system for two seasons, playing in his first three major league games in late 1991.

He made the Indians system for 1992, traded by the Dodgers in a three-player deal that sent Rudy Seanez the other way. Over parts of two seasons with the Indians, Christopher pitched in a total of 19 games.

For 1994, Christopher signed on with the Tigers, spending the year at AAA Toledo. Then came 1995 and replacement ball. Christopher played through 1996 and his playing days were done.

Playing for Sparky Anderson and the Tigers in 1995, Anderson had good things to say about the right-hander. Anderson spoke as he resigned amid talk that the owner was upset that he passed on managing a replacement team that spring.

As proof of his feelings toward the players, Anderson invoked Christopher.

"I left spring training because I would not have anything to do with something like that," Anderson told the Associated Press. "But when the regular season started, I had a replacement player on my club. And I think Mike Christopher was one of the best pitchers I had."