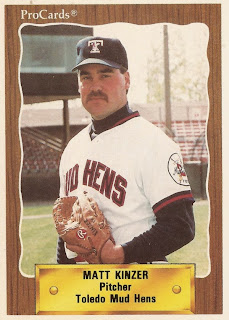 The Tigers were already down to the White Sox 6-4. If they had hopes of coming back, they needed a stop. Matt Kinzer was called on to do that. It didn't turn out as Kinzer or the Tigers had hoped.

Two singles, two walks and a double later and the White Sox had scored four more. Kinzer quieted down in the ninth, but by then it was too late.

"I'm down right now, but I know it won't be my last chance," Kinzer told The Toledo Blade afterward. "Hopefully, I'll come on in a better situation next time and get the job done. I know I definitely didn't impress anybody."

Aside from his second inning, Kinzer didn't impress anybody. He also didn't get another chance. Kinzer's outing that day was his first and last with the Tigers. It was also his ninth and last appearance in the majors.

Kinzer's career began in 1984, taken by the Cardinals in the second round of the draft out of Purdue. Kinzer came out of Purdue, where he played both baseball and football, his football time spent as a punter. The punter part would later make him the answer to a trivia question.

His baseball career began with the Cardinals at AA Arkansas. He went 5-6 with a 4.46 ERA with the Travelers. He wouldn't see AA again until 1987. In the meantime, he pitched at single-A Springfield in 1985 and single-A St. Petersburg in 1986.

At Springfield, Kinzer suffered a torn rotator cuff, surgery cutting short his season, according to The St. Petersburg Times. At St. Petersburg, Kinzer routinely worked six innings, though his numbers weren't the best, The Times wrote in June.

It was in fall 1987 that Kinzer got the first part of his trivia question. During the National Football League strike, Kinzer served as a replacement punter for the Detroit Lions. The second part came in his outing in 1990 for the Tigers, with Kinzer playing for both the Detroit football team and the baseball team.

Returning to baseball for 1988, Kinzer returned to AA Arkansas, then hit AAA Louisville. It was in May 1989 that Kinzer made his major league debut with the Cardinals.

Kinzer had two scoreless relief appearances, The Associated Press wrote, before getting his first start May 23. He gave up seven hits and six runs in just over two innings against the Reds.

"The Reds hit a pitcher who didn't quite have his stuff," Kinzer told The AP. "I was real nervous, real anxious. I'm not making excuses, but that might have been part of it."

That outing was Kinzer's only start. He stayed with the Cardinals through early June, then returned in September for two more outings in relief. One of those September outings came against the Mets. In one inning, Kinzer gave up three earned runs. He had an ERA of 12.83 on the year.

That off season, the Cardinals sent Kinzer and another player to the Tigers for three players in return. Kinzer had 15 outings at Toledo, plus the one with Detroit. before being released by The Tigers in July. Kinzer signed briefly with Baltimore, playing three games at AA Hagerstown, ending his career.

Kinzer later became a scout for the Devil Rays, then an agent. He has also served as assistant baseball coach for Taylor University. His son, Taylor Kinzer, was drafted by the Angels in 2009 and played three seasons in the minors.

Among his clients as an agent has been pitcher LaTroy Hawkins, or "Hawk." The Houston Chronicle wrote in 2009 how Kinzer used his pitching experience to help Hawkins extend his career.

"With Hawk, or with any pitcher, if there's a little bit of error, it offsets tempo and rhythm,” Kinzer told The Chronicle. "It's more trusting the mechanics. He's brilliant on the mental side. He's been in the game long enough to know how to compete and adapt. It was just getting his mechanics worked out."