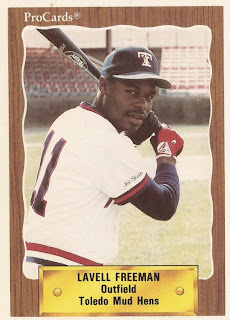 Lavel Freeman had been talked about in spring 1989 for a Brewers outfield slot. But, by the time the season began, Freeman was back at AAA Denver. He wasn't there for long. An early Brewer injury and Freeman was with the big club, ready to make his major league debut.

"I just want to contribute in any way I can," Freeman told the Milwaukee Sentinel after being called up. "I'd like to make a positive impact and make them have a tough decision about sending me back."

Freeman, however, never got much of a chance to make that impact. He debuted on April 7 against Detroit, going 0 for 3. His final major league appearance came the very next day, put in as a pinch runner late, scoring his only run.

Freeman got his one trip to the majors after five seasons in the minors, two where he won minor league batting titles. He was originally taken by the Brewers in 1983 in the first round of the January draft.

He started that year at rookie league Paintsville, bringing his bat with him. He hit .307 in 71 games for the Brewers club. He lost a bit the next year, hitting .257 between single-A Beloit and single-A Stockton.

It was at Stockton that Freeman's bat got going again in 1985, hitting .314. He also helped Stockton that year to the California League Championship series.

"That was my first real test at professional baseball and that excitement of going into a playoff game to try and move to the next level," Freeman told the Stockton Ports on Alumni Night this past year. (Video is below) "That would probably be my fondest memory."

He won the Texas League batting title that year, then won the AAA American Association title the next year at Denver with an average of .318.

Then came spring 1989. In early March, the Milwaukee Journal wrote the Brewers liked what they saw in Freeman. But there was also a logjam in the outfield, with several players competing for a couple slots.

"I think he can play in the big leagues," Brewers manager Tom Trebelhorn told the Journal, "and he has done nothing here to disprove that."

But, by late March, Freeman was sent down. He hit just .163 on the spring, the Sentinel wrote. One of his hits that spring came with his speed, beating out a squib, according to the Chicago Tribune. He also got an early triple.

"I felt like this was a big year for me," Freeman told the Sentinel after being sent down. "My batting average didn't show I was scorching the ball, but I hit OK. I showed I could compete on this level."

But, after getting his all-to-brief chance in April, Freeman was sent back down. The Brewers had to make way for Paul Molitor to come off the DL. He played the balance of the year at AAA. But his bat never came back. By the end of June, the Brewers tried to take care of that logjam in the outfield, trading Freeman to the Rangers. He hit just .238 on the year.

By 1990, Freeman was with the Tigers system, at AAA Toledo. He hit a two-run home run in late June, but his average dropped on the year to .214. It was his final year in pro ball.

Freeman has continued to be involved in baseball, participating in alumni nights and other events. In February 2009, he participated in a Sacramento-area Honorary Negro League Game, an event coordinated between two Sacramento State students and brothers.

"It's beautiful that these two brothers thought to get 30 black men to honor the Negro League," Freeman told the Sacramento State Hornet. "It's good to get a younger generation embracing their history."