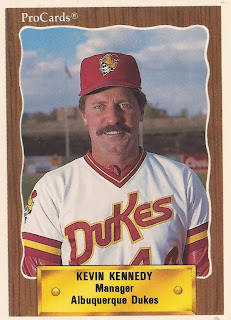 Standing there at third base with veteran major leaguer John Shelby, Albuquerque Dukes manager and third base coach Kevin Kennedy went over Shelby's troubles at the plate, the troubles that sent Shelby back to the minors, The Los Angeles Times wrote in 1989.

Kennedy went over Shelby's troubles, and his own troubles years earlier as Kennedy was a player himself in the minors.

"Sometimes it gets so mental, sometimes you look out there and see 18 fielders," Kennedy told The Times. "I told John, 'You just don't lose that much ability that quickly. I told him to relax and have fun and it would come back."

The Times told of Kennedy's interaction with Shelby after first noting that Kennedy was then "highly regarded within the organization for his communication skills."

Kennedy's career in baseball began in 1976 as a player, taken by the Orioles in the sixth round of the draft. He made AA Charlotte that year and AAA Rochester in 1977. But, in a career that saw playing time in eight seasons, Kennedy never made the majors as a player.

His managerial career began in 1984, helming the rookie league Great Falls Dodgers, staying there for three seasons. By 1988, Kennedy was managing AA San Antonio. That July, his team went 26 innings for a 1-0 win. In 1989, Kennedy took over AAA Albuquerque, staying there through 1991.

It was in 1992 that Kennedy got his first look at the majors, as a coach with the Expos. From there, he jumped to the Rangers, as manager for 1993.

In his first year with the Rangers, Kennedy went 86-76, for a second place finish. The Rangers hired Kennedy knowing that none of Kennedy's minor league teams ended with a losing record or finished lower than second place, The Times noted.

"We knew he was a high-caliber guy," Rangers GM Tom Grieve told The Times. "People in baseball, the ones who follow the inner-workings of the game, knew all about Kevin Kennedy."

His 1994 season, though, wasn't as good. While he managed to come in first in the strike-shortened year, it was in the underwhelming AL West. The first-place Rangers were 10 games under .500.

The Rangers even worked for that, playing until the final game before the strike's start to take first. "I'll treat tomorrow like it's all or nothing," Kennedy told The Associated Press before the final game. "Everybody will be in the bullpen."

Despite having the best record in the division, Kennedy was fired. Part of his departure was blamed on the clubhouse. Some players believed Kennedy was too honest and hard on them, according to wire reports.

"I am pretty honest, and sometimes people don't want to hear honesty," Kennedy told reporters after he was fired. "The weak will not be winners. When it's crunch time, they won't be there."

A week later, Kennedy was a Red Sox, hired as Boston's manager. In his first year, Kennedy's team went through a stretch in June where they lost five of six. Kennedy tried to stay cool in the face of troubles, The Hartford Courant wrote.

Kennedy and the Red Sox were rewarded with a division title. In 1996, Kennedy's Red Sox got off to a slow start, ending in third. It wasn't enough for him to keep his job. The honest manager had also grown to be a player-friendly manager, something Red Sox brass didn't like, The AP wrote. He was also by some "considered egotistical and difficult," The Courant wrote.

By April 1997, Kennedy was in his new career as a different communicator, on television. Kennedy was a commentator for ESPN. "I'm enjoying my new job,'' Kennedy told The Courant. "I truly am having a lot of fun. It's a blast."

Kennedy has since gone on to work as a commentator for Fox Sports and for the Rays, along with SiriusXM.

"My job as an analyst is to tell the viewers how and why, give them options," Kennedy told MLB.com after being hired by the Rays. "Present options and about what people are thinking when things happen in the game. ... But I'm certainly not there to second-guess. I know how tough it is as a player or a manager."