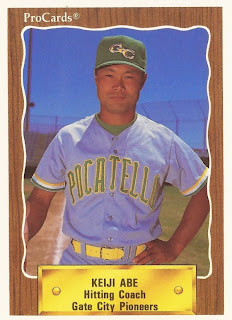 The Hiroshima Carp sent several players to the United States in 1989, and again in 1990, to learn the American game. Sent there with them was coach and former Carp player Keiji Abe.

"It is very important to be here and to learn and study American baseball," Abe told The Newport News Daily Press in May 1989, through an interpreter. "The method of coaching in Japan is to take care of players, somewhat spoil them. Coaches in Japan don't approach the players, the player approaches the coach when he needs him."

Abe coached with his Carp players in 1989 with the Peninsula Pilots. In 1990, it was with the rookie Gate City Pioneers.

Abe has since gone on to a long career as a coach in various capacities with the Carp, including in China.

Abe's career in baseball began in 1983, taken by the Carp in the sixth round of the 1979 draft, out of high school in Japan. The Japanese form of Abe's name is 阿部慶二.

With the Carp, Abe didn't make the first team until 1984. When he got there, though, he made his presence known quickly. In his first at bat, as a pinch-hitter, Abe hit a home run, according to his Wikipedia Japan page.

That home run turned out to be his only one in the Japanese majors. He got into nine games that first year in 1984, then 16 two years later in 1986. His final games then came in 1988, two games. In 18 career at bats, he picked up just two hits. One of those was the home run.