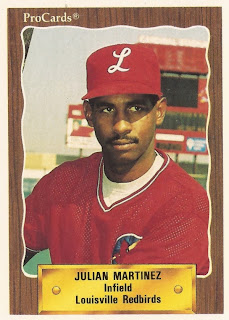 Julian Martinez helped Sammy Sosa, but he helped others on the Cubs, too, Sosa told The Chicago Tribune in October 2003. Martinez certainly wasn't Sosa's valet.

"I want people outside the lines to understand why he's here," Sosa told The Tribune of Martinez. "He's not here for me. He's here because he helps everybody. Anything he can do to help a player get ready to play the game, he'll do it."

Martinez began working with Sosa in 1999, but their relationship dated back much further, to 1986 when the Dominican natives playing in the minor leagues, The Tribune wrote.

While their playing careers began in similar fashion, they would quickly diverge, with Sosa going on to star in an era of big home runs. Martinez would play eight seasons professionally, a career played exclusively in the minors.

Martinez' playing career began in 1985, signed by the Cardinals out of the Dominican Republic. The infielder played that year at rookie league Johnson City, hitting .194 in 21 games.

Martinez scored the go-ahead run in an April 1987 contest with Sumter. That June, against Sumter again, Martinez knocked in the game-winning run in the bottom of the ninth of a 1-0 game, The Sumter Daily Item wrote.

For 1988, Martinez stayed in single-A, playing at St. Petersburg, hitting .251, getting a game-winning single in an April against Lakeland. He won his promotion to AA Arkansas in 1989, playing the season there, maintaining his average at .255, and hitting nine home runs. He also made the Texas League All-Star team.

Martinez hit AAA Louisville for 1990, hitting just .213 and two home runs for the Redbirds. He scored the game-tying run in an April game and in a July game. Martinez returned to Louisville for 1991, then finished out his playing career in 1992 back at AA with Arkansas.

Martinez joined Sosa and the Cubs in 1999, paid by Sosa and serving as Sosa's assistant, but also helping other players, The Tribune wrote.

His future with the team and Sosa was in doubt in 2004 when baseball cracked down on non-baseball people in the clubhouse, The Tribune wrote. The Cubs were trying to get around the order by giving Martinez a more formal title.

Sosa and Martinez eventually parted ways professionally, but remained friends. When Sosa returned to baseball in 2007 with the Rangers, Martinez was with the Nationals as a bullpen catcher. That was also the year that Martinez' old friend hit his long-delayed 600th home run.

"I'm really happy for him, especially after what he went through," Martinez told MLB.com that June after Sosa hit his milestone. "He has 600, so now he is going to be more relaxed. I'm going to celebrate for him."