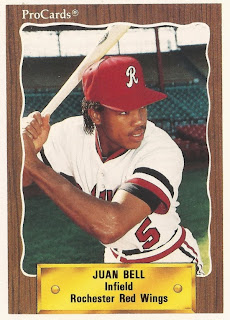 Going into 1989, the Orioles had options in their infield other than Juan Bell. The option the team chose for Bell was more time in the minors.

"Bell is going to be a fine player," Orioles GM Roland Hemond told The Associated Press that March, "but can use a little more seasoning. There's no need to rush him, especially with (Craig) Worthington doing so well."

The Orioles didn't rush Bell. He spent the season at AAA Rochester, hitting .262. He did make the majors in September, but for only eight games.

Bell, though, never became the fine player that Hemond predicted. He ended up playing in seven big league seasons, 329 games, his career batting average ending at .212.

Bell's career began in 1984, signed by the Dodgers out of his native Dominican Republic. Bell is the younger brother of slugger George Bell.

Bell played his first two seasons in the rookie Gulf Coast League, moving to single-A Bakersfield in 1987. He split 1988 between AA San Antonio and AAA Albuquerque. Between the two levels in 1988, Bell hit .290 with 13 home runs.

That December, the Dodgers sent Bell and two others to the Orioles in exchange for Eddie Murray.

"I am a young guy and I feel I work the most I can to be a real good baseball player," Bell told The AP after the trade. "I think I can hit in the big leagues. I just have to keep working hard."

By August 1992, though, Bell was with the Phillies, sent over in a trade. He was also portrayed in The Philadelphia Inquirer as already trying to salvage a once-promising career.

"I'm a better defensive player now," Bell told The Inquirer. "Now, I pay more attention out there to who's hitting, what pitch is being thrown, who the runner is. I've also been attacking the ball more rather than letting it come to me."