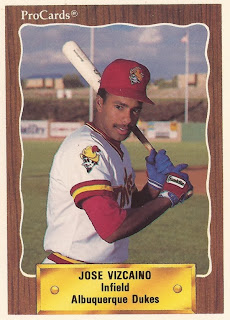 Named to start in Game 1 of the 2000 World Series for the Yankees, Jose Vizcaino called it "like a dream come true," according to The New York Times.

That night, Vizcaino went one better. He went on to win that first World Series game, a single to left, in the bottom of the 12th, giving the Yankees a 1-0 series lead and putting his team well on its way to another championship.

Vizcaino's path to that game began in 1986, signed by the Dodgers out of his native Dominican Republic. He started in 1987 with in the rookie Gulf Coast League, made single-A Bakersfield in 1988 and AAA Albuquerque in 1989.

It was also in 1989 that Vizcaino made the Dodgers, getting into seven games. He returned for 37 more in 1990, hitting .275. That off-season, Vizcaino arrived with the Cubs in a trade.

It was with the Cubs that Vizcaino became a regular, getting into 93 games, playing second, third and short. He stayed with the Cubs through 1993, playing in 151 games his third season with the club.

He also hit four home runs in 1993, one of them proving the game winner in a July contest.

"When you hit a home run to win a game, it's going to be exciting," Vizcaino told The Chicago Tribune afterward. "He gave me a curveball I could hit."

In August 1995, Vizcaino went 9-14 in a series with another game-winning hit, telling The New York Daily News "I just try to do my job and not make too much noise."

After going through the Indians, Giants and Dodgers, Vizcaino arrived with the Yankees mid-2000 trade. In 73 games for the Yankees, Vizcaino hit .276.

In the World Series, he went 4 for 6 in that Game 1 start, including the game-winner. "It's always important to stay ready," Vizcaino told The Daily News after starting Game 3. "You never know when you are going to get called."

Vizcaino moved to the Astros for 2001, remaining with the team through 2005. He stayed with the team long enough to almost duplicate his Game 1 2000 feat.

In Game 2 of the 2005 World Series, Vizcaino hit a pinch-hit, two-run single in the top of the ninth to tie the game against the White Sox. The Astros, though, would lose the game on a home run in the bottom of the frame.

"That was a huge knock," Astros catcher Brad Ausmus told MLB.com later of Vizcaino's hit. "Viz has done it so many times for us, he's incredible really. To come in cold in that situation against a pitcher like (Bobby) Jenks and get that big hit, that's about as big as it gets."

Vizcaino played one more season, with the Giants and the Cardinals, ending his career. Vizcaino has gone on to return to the team that originally signed him, the Dodgers, serving as a special assistant for baseball operations and player development.