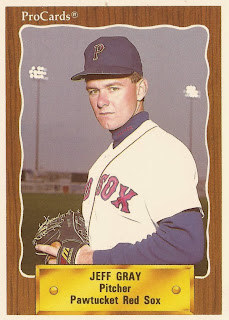 Jeff Gray prepared for the game like any other. He was in the middle of a breakout season for the Red Sox. The reliever had appeared in 50 games for Boston, posting a stellar 2.34 ERA.

But, as he spoke with friend and teammate Daryl Irvine before this July 30, 1991 game, all that would end.

"I was talking to Daryl and all of a sudden, my nose started burning something fierce. It was like it was on fire, but there was no fire," Gray told the Los Angeles Times in November 1991. "I splashed some water on it, but that didn't help. All of a sudden, my legs left me and I was gone."

Gray was suffering a stroke. Right there in the locker room. Rushed to the hospital, he would survive. He would also recover, and try a comeback. But he would never pitch in a game again.

That day in July 1991 came after a professional career that spanned seven seasons, three of those with appearances in the majors.

Gray's career began with the Phillies system, signed by the club as an amateur free agent. After two seasons there, he was sent on to the Reds in a four player deal that sent Tom Hume and Gary Redus to the Phillies.

With the Reds system, Gray was sent to AA Vermont for 1986, then AAA Nashville for 1987. With Vermont, Gray struck out three while getting the final six outs to preserve a Vermont playoff win. Vermont went on to the title, beating Reading. Gray would stumble in the ninth inning of the clinching game, but Vermont held on.

He made Cincinnati in June 1988, pitching in five games with a 3.86 ERA. His final game with the Reds, he gave up two runs.

Then came the stroke. He was released from the hospital by Aug. 8, but his recovery was just beginning. And his goal was a full recover, with a return to the mound.

By spring 1992, Gray's progress was unmistakable, according to The Boston Globe. He went from not being able to even hold a baseball, to throwing at 70 mph.

"All I know," Red Sox GM Lou Gorman told The Globe, "is that seeing him five months ago, you'd have said recovery was impossible, it couldn't happen. If you see him now, you say he's got a chance."

Gray returned again for spring training 1993. He had a strong showing, and the Red Sox increased his work, but he never made it back. He officially abandoned his comeback hopes in January 1994.

The Times ended its November 1991 article with Gray talking about his rehabilitation, and what turned out to be Gray's unreachable goal.

"Pretty much every waking hour of my day is spent trying to get rid of this," Gray told The Times. "The doctor says he thinks I'm going to be normal and my goal is to go to spring training and participate completely. I don't know if I'll be ready to do that, but that's my goal. We're looking toward the future."