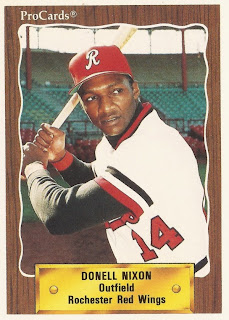 Donell Nixon seemed to be running on a path to quickly make it to the majors in spring training 1985.

But then, two springs after Nixon broke the minor league stolen base record at single-A Bakersfield with 144 swipes and topped 100 steals again at AA Chattanooga, Nixon ran into a wall - the outfield wall - breaking his leg.

"When I broke my leg, people wondered if I'd walk again," Nixon told The Wilmington Star-News in 1988, in Nixon's second season in the majors. "I was out for 18 months. Thank God I'm back in the game."

Nixon returned from that injury by the end of 1986. By 1987, he was all the way back, debuting in Seattle that April. He even got to play in a World Series.

With the Mariners, Donell Nixon started at single-A Wausau in 1981, swiping 20 bases in 59 games. He returned to Wausau for most of 1982, this time stealing 85.

It was in 1983, with single-A Bakersfield, that Nixon really showed off his speed, stealing a record 144 bases. In August, as he neared the mark, Nixon had his sights set higher - the major leagues.

"I feel ready right now," Nixon told UPI then. "But I'll let my stats do my talking."

After that year, Nixon moved up to AA Chattanooga, stealing 102. Then came his spring in 1985, and his 16-month layoff.

His 1989 campaign proved his most successful, in terms of games played. He stayed with the Giants for 95 games. He hit .265 and stole 10. In the playoffs, he got into five games, two in the World Series. He went 1 f or 8, with one stolen base.

That off season, Nixon told The Star-News he was working to remain in the majors for the foreseeable future.

"I may be getting a little older, but age is often a state of mind in professional sports," Nixon told The Star-News. "I do think, though, that as a player gets older, the more he needs to work at keeping himself in shape during the off-season."

Whatever shape Nixon was in, his remaining major league time was limited. Signing for 1990 with the Orioles, Nixon played much of the year at AAA Rochester, getting just eight final appearances in the majors. He played in three more seasons in the minors, in the Indians system, but never returned to the bigs.