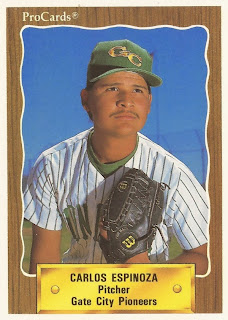 Carlos Espinoza started in Mexico, and that's where he ended up.

A native of Obregon in the Mexican state of Sonora, Espinoza played well enough to get the notice of scouts from the Montreal Expos.

Espinoza's professional career began in 1988, signed by the Montreal Expos as an undrafted free agent out of his native Mexico.

He is credited as playing that year with Monclova of the Mexican League. With the Expos, Espinoza played his first season in the rookie Gulf Coast League, getting 17 relief outings. Over 34 innings, Espinoza gave up 15 earned runs.

For 1990, the Expos optioned him to independent Gate City in the rookie Pioneer League. With Gate City, he got into 24 games, starting three. But an ERA of 6.70 helped make that third season his last in the United States.

Espinoza then returned to Mexico, and continued playing. He returned to Monclova for 1991, playing with the Acereros through 1993. His last recorded time as a professional came in 1994, with the Mexican League's Aquascalientes Rieleros.