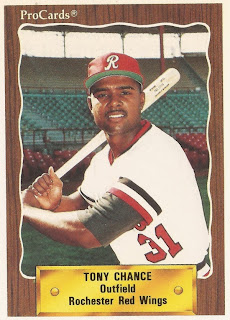 Pirates GM Syd Thrift knew Tony Chance had raw talent, he told The Associated Press. In July 1987, he was putting that talent together.

Thrift spoke to The AP as Chance was in the middle of a season for single-A Salem where he would hit .318, with 23 home runs.

"I won't be surprised at all if he's not playing for us soon," Thrift told The AP. "He can run and throw, and he's hitting for average and power. That's a pretty good combination."

Chance, though, never would play in Pittsburgh or anywhere else in the majors. But Chance would go on to play professionally over two decades, starting in 1983 and not ending until 2002.

Chance was originally signed by the Pirates in 1983, as an undrafted free agent. He was also signed as the son of a former major leaguer, the son of Bob Chance, who played in the 1960s.

The younger Chance started with the Pirates in the rookie Gulf Coast League as an 18-year-old. He moved to short-season Watertown in 1984. On the season in 1984, Chance hit just .171.

He hit single-A Gastonia and Macon in 1985, but stayed in single-A through 1987, when he had that season with Salem.

His first look at AA came in 1988, with 56 games at Harrisburg. He ended the year back at Salem. In August, his connection to his major league father came up in an article on sons of former major leaguers.

"My dad is much bigger, stronger than I am," Chance told The AP, comparing himself to his father. "I was blessed with a little more speed."

Chance's season, though, then came to a premature end later that month on a diving catch that separated his shoulder.

In 1989, Chance spent more time at AA. He also predicted to Baseball America that he'd be in Pittsburgh by the next season, according to The Washington Observer-Reporter. In June, though, made the move to the Orioles system in a trade.

While he didn't make the majors in 1990, Chance did make AAA, at Rochester. He played the season there, hitting .269. In late May, Chance hit a game-winning, bases-loaded single.

It was the first of six straight seasons for Chance at AAA. He returned to Rochester for for 191, moved to the Cubs and Iowa for 1992 and 1993. He then spent time at AAA Charlotte in 1994 with the Indians. He also played in Mexico.

In spring 1995, he spent time as a replacement Ranger. "It's just nice to have the opportunity to be in a big-league camp again," Chance told The AP of the experience that spring. "It beats digging ditch, working a real job."

Chance played at AAA Oklahoma City once the season started, his last time in affiliated ball. But he continued playing in the independent leagues and Mexico through 2002, last playing in the North Central League at Joliet.