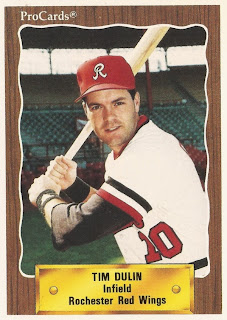 Competitive youth baseball has grown tremendously in recent years, Tim Dulin told The Memphis News in 2011, so much so that it's gotten a bit crazy.

"You have to travel to play good competition. (College) coaches are able to identify (talented) players at an early age because of the good competition," Dulin explained to The News. "A lot of money is spent on these kids, and the economic impact is no doubt huge."

Dulin would be in a position to know, running his own baseball academy, Dulins Baseball, in the Memphis area since 1994, claiming 22 All-Americans and 75 professionals in that time, The News wrote.

Dulin started the academy in his hometown shortly after his own playing career ended, a career that lasted seven seasons, but never got to the majors.

Dulin's playing career began in 1985, taken by the Orioles in the fifth round of the draft, out of the University of Memphis. At Memphis, Dulin was a two-time All-American himself, holding the school's career stolen base record at 66, until it was broken in 2007.

He played that first season at rookie league Bluefield, hitting .271 in 66 games. He moved from there to short-season Newark and single-A Miami for 1986, hitting .251 between them.

After going through single-A Hagerstown in 1987, Dulin arrived at AA Charlotte and AAA Rochester in 1988. In the May 31 contest, Dulin hit one of his 11 home runs with Charlotte.

His final full year came in 1990, back at Rochester. Dulin hit .238, with three home runs. His final playing time came in 1991, with the Pirates at AAA Buffalo. Dulin only got into 14 games, getting just two hits in 28 at bats.

Dulin's son Dalton Dulin played his way through the college ranks, committing in 2010 to attend Ole Miss as an infielder.

In July 2011, during a 16 and under tournament with his Dulins Dodgers team, Dulin explained the goal of working with young players at his academy.

"First and foremost, it is about the kids and it's about getting exposure," Dulin told PerfectGameUSA. "It's about playing in front of scouts and playing at a high level to hopefully get them ready to play, whether it's in college or as a professional."