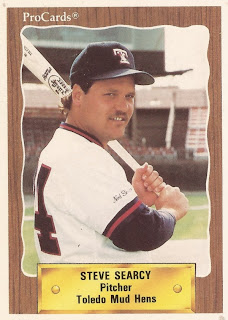 Steve Searcy went into spring 1993 believing he was going to make the Orioles, he told The Baltimore Sun. He wasn't going down to AAA.

Searcy spoke as someone who needed to have a positive attitude, having already seen major league time in each of the previous five sometimes injury-plagued seasons. But he wouldn't see major league time this time or again. Searcy played that year, 16 games at AAA Rochester, the last professional games he played.

Searcy's career began in 1985, taken in the third round of the draft by the Tigers from the University of Tennessee. The left-hander started that year in rookie ball, but made AA Birmingham by year's end.

At AA again in 1986, this time at Glens Falls, Searcy went 11-6 with a 3.30 ERA. In 1987, he made AAA Toledo. That season, however, was injury shortened, a come-backer to the mound broke his knee-cap, according to The Toledo Blade.

Going into 1989, he was seen as having a good shot at breaking the Tigers' starting rotation, according to The Ludington Daily News. Then injury struck again, this time arm problems. Those arm problems let to more rehab, but his arm was weakened.

It was an important injury for a pitcher like Searcy, The Daily News wrote.

"I'm not a pitcher that is going to nibble at the corners," Searcy told The Daily News. "I want to come at people. I just wasn't capable of doing that (while on rehab at Toledo) At one point, I wondered 'Why am I even trying? I'm not getting any better.' "

But he continued, and he returned to the Tigers by September and got is first win. He was also looking to return to the majors for 1990. He also returned to form in the eyes of the Tigers brass.

"He's back to being the prospect he was in 1987," Toledo manager Tom Gamboa told The Blade in May 1990. "His focus, his concentration from the first pitch to the last has been outstanding."

Searcy was 2-7 with a 4.66 ERA for the Tigers in 1990. He returned for 1991, worried that he wouldn't make it. Tigers manager Sparky Anderson was interested to finally learn whether Searcy could make it, according to The Associated Press.

"I have to find out one way or another if he's going to make it," Anderson told The AP that spring. "Now's the time."

Searcy pitched in 16 games for the Tigers that year, but it wasn't Searcy's time. He was 1-2 with an ERA over 8. By July, he was released. Picked up by the Phillies, Searcy pitched in another 18 games that year and 10 more in 1992, his final game coming June 1.

He signed on with the Orioles that next year, but his time in the majors was done. He didn't make it to Baltimore, ending his career in AAA.