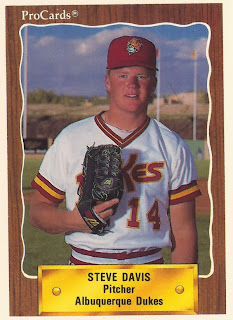 Steve Davis had had an impressive year in the minors in 1985. Between AA Knoxville and AAA Syracuse, Davis had gone 20-8 with 2.46 ERA.

Now, at the end of August, he found himself in Toronto. And he knew his work was just beginning.

"I can't come up here and sit on it (20 wins)," Davis told The Associated Press after his first major league win in his second appearance. "I want to be here next year."

Twelve more appearances in 1989 with Cleveland and Smith's work in the major leagues would end, with a big league record of 3-2. His professional career would end a year later, after nine seasons in professional ball.

Davis' professional career began in 1982, taken by the Blue Jays in the 21st round out of Texas A&M University.

He played that year at short-season Medicine Hat, going 5-1 with a 3.44 ERA. He played much of 1983 at single-A Florence, getting into the South Atlantic League All-Star Game, and picking up the win.

That August and September, Davis pitched in a total of 28 innings for the Blue Jays with a 3.54 ERA, as the team worked its way to the playoffs.

Davis started 1986 with the big club, serving as Toronto's only left-handed reliever. He got into three games that April. In his third and final outing, Davis worked two innings and gave up five earned runs.

His final season came in 1990, pitching with the Dodgers at AAA Albuquerque. He went 7-8 with an ERA of 4.31. His efforts did not earn a call up to Los Angeles.

Of his three total major league wins, Davis got his first in his second appearance, his third and last in that August 1989 game for Cleveland.

His second came in his fourth big league appearance, at Toronto's Exhibition Stadium. And he had to work against unusual obstacles to get it: gnats and flies, according to The Ottawa Citizen.

He went five innings, gave up three runs and struck out six Twins. In the third inning, he encountered the insects.

"I don't (know) what they were," Davis told The Citizen, "but I swallowed a couple."