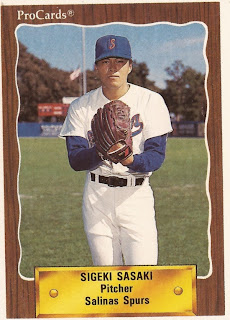 Shigeki Sasaki's season for the high-A Salinas Spurs didn't go as well as he had hoped.

But, in one July game, a five-inning Sasaki outing resulted in his second win of the year, a 6-1 Salinas victory over Modesto.

Sasaki's Spurs provided him with enough run support and Sasaki limited Modesto to that single run, according to The Modesto Bee.

In those five innings, Sasaki gave up only three hits. One of those hits, was a lead-off home run, on his offering of the game, The Bee wrote.

That home run ended up being one of 11 Sasaki gave up for the Spurs that year. They were the only home runs he would give up stateside. He would also never see Nippon Professional Baseball in Japan.

Sasaki's professional career began in 1987, taken by the Yakult Swallows in the fifth round of the 1986 draft out of high school in Miyagi Prefecture.

Sasaki pitched for the Swallows' second team from 1987 to 1992. In 1990, he came to the United States and the Spurs in 1990 with several other Japanese players signed with the Daiei Hawks or the Yakult Swallows. Sasaki's name has also been spelled Sigeki Sasaki.

With Salinas, Sasaki got a total of 34 outings, 16 of them starts. In a May game, he gave up a three-run home run.

Two of his Salinas starts were complete games. Over 122.2 total innings, Sasaki struck out 86 and walked 75. He also picked up just those three wins.

That year in Salinas ended up being Sasaki's only season where stats are available. He continued playing in Japan through 1997, according to his Japanese Wikipedia entry. From 1993 to 1997, he played for the Fukuoka Daiei Hawks' second team.

Sasaki has gone on to be a coach, serving as a guest coach for the Rakuten Eagles baseball school.