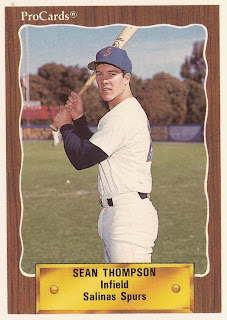 Thompson made that switch to second base with the Giants at the club's rookie league time in Pocatello.

"Second base is where I think his future is," Giants scout George Genovese told The Times of Thompson. "I worked him out there and he shows excellent aptitude. He's a great hustler and his talent and attitude will take him a long way."

For Thompson, though, that switch to second base ended up not taking him that far. He played that season and one more, marking the extent of his career.

Thompson's career began that year in 1988, taken by the Giants in the 40th round of the draft, out of Los Angeles Valley College.

Thompson went to Valley out of Westlake High School. At Westlake, Thompson played on the local American Legion team, earning his team's "Outstanding Sportsman" award, according to The Times, as he hit .390 with six home runs.

At Valley, Thompson picked up two singles and a home run in an April 1988 contest. Then he was taken by the Giants in June.

Thompson played his first professional season at Pocatello. He got into 34 games, hitting .253. He had no home runs and just three RBI. Thompson picked up two hits in one late-June game.

That season a Pocatello ended up being Thompson's only season with the Giants. After not being recorded as playing in 1989, Thompson returned for 1990 with independent Salinas.