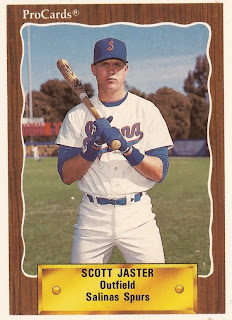 Scott Jaster seemed to hit well in some situations in 1989 and poorly in others, according to The Newport News Daily Press.

It all seemed to depend on which team he played for, and whether he was trying to impress anyone that day, The Daily Press wrote.

"It's like this," Jaster told The Daily Press. "When I get in the box and I'm totally concentrating on myself and the pitcher, the bat is light in my hands. When I'm in the box and I'm trying to impress the Mets, the manager and the fans, it's like I'm swinging a 50-ounce bat."

Jaster was in his fifth season as a pro that year playing in the Mets system. He went on to play in four more seasons, but he never saw the majors.

Jaster's career began in 1985, taken by the Mets in the second round of the January draft, out of Trinidad State Junior College in Colorado.

Jaster followed his father into the pros. Jaster's father was Larry Jaster, who played parts of seven seasons in the majors.

Jaster then played all of 1986 at Columbia, hitting .252, with 14 home runs. In one July game, he had two extra-base hits and knocked in three, helping Columbia to a come-back win. He also made the league all-star team.

"Making the all-star team is part of climbing the ladder," Jaster told The Charleston News and Courier later. "Not just for myself, but making it to the major leagues would do a lot for my dad, too. I'm sure he's happy and proud of me right now."

Absent a one-game stint at AAA Tidewater in 1987, Jaster continued playing at single-A for the Mets through 1989. That 1989 season with Peninsula and Port St. Lucie was also his last in the Mets system.

Jaster continued his career in 1990, with independent Salinas in the California League. There, he hit .264 over 59 games.

For 1991, he returned to affiliated ball, with the White Sox. He also made AA for the first time. He hit .265 over 104 games at Birmingham that year. In 1992, he got his first actual stint at AAA, playing at Vancouver for 20 games.

Jaster, though, had just one more season as a player. He played 1993 at AA Memphis for the Royals, ending his career.

Jaster went on to a career as a scout, working with the Arizona Diamondbacks. Jaster was the scout who signed Dan Uggla, getting Arizona to take him in the 11th round in 2001.

Jaster left the game in 2005 to spend more time with his family, according to the book "In the Ballpark" by George Gmelch. Jaster's new job was with a pharmaceutical company.

Jaster told Gmelch the move was "a big adjustment."