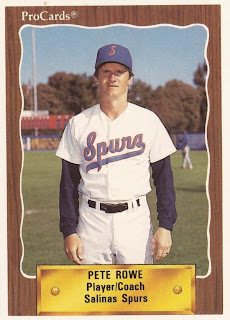 When Dunedin starting catcher Brian Milner went down with an injury in 1979, backup Pete Rowe got his opportunity to step in, according to The St. Petersburg Times.

Rowe then was in his third season as a pro and he was hoping his play that year might get him noticed, The Times wrote.

"All anyone wants is a fair shot," Rowe told The Times. "If you don't do well after that, then you deserve what you get. If Milner was healthy, I could have been backing up. I am lucky. I got this chance to show what I could do."

Over 94 games that year, Rowe ended up hitting .255. He also got noticed enough to spend the next season at AA Knoxville. He never got higher.

Rowe's career began in 1977, taken by the Blue Jays in the 11th round of the draft, out of Oregon State.

At Oregon State in 1976, Rowe hit .338 as a junior, knocked in 38 and won the honor as his team's top player, according to The Eugene Register-Guard.

As a senior the next March, Rowe hit a game-winning three-run home run. He also was named to the Pacific 8's All-Northern Division team all four years he was there.

He then returned to Dunedin for 1979, doubling and scoring in a late-August game. In one stretch that year, he hit over .300, and hit three home runs in a week, according to The Times.

From Dunedin, Rowe moved to AA Knoxville for 1980. He hit .277, but it was his final season with the Blue Jays. After not being recorded as playing in 1992, Rowe returned with the Pirates for 1982, hitting between single-A Alexandria and AA Buffalo, hitting .286.