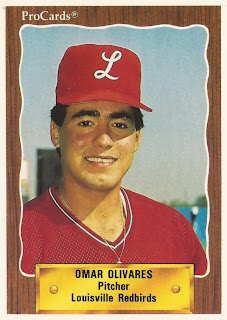 Having just posted his own personal fifth straight loss in 2000, Omar Olivares knew what was wrong and he vowed to work through it and fix it.

"I know what's going on mentally. I'm just not able physically to get it done," Olivares told reporters after that June game with Oakland. "I'm not throwing strikes. I have not been able to hit my spots. I just have to keep my head up. I'm in great shape. I'm not going to give up. It's not my style, I'm a fighter."

That was the style that pushed Olivares into his 11th major league season that year. It would also push him into one more before his career was out.

Oliveraes' career began in 1986, signed by the Padres out of his native Puerto Rico. He worked through problems early on. In 1987, at single-A Charleston, Oliveras pitched well, The Charleston News and Courier wrote, but he still started 1-9.

The next year, however, he went 16-6 on his return to single-A and earned a promotion to AA Wichita for 1989. He made AAA in 1990, after being traded to the Cardinals that spring.

He got his first major league win in September against the Expos, giving up three runs in six innings. He also got it done at the plate in another game, getting a home run and a double against the Cubs.

One of his 1992 wins came in a June game as he shutout the Mets over seven innings. He threw a complete game in April against the Expos, giving up three runs, but shutting Montreal out for the last seven innings.

"I threw 128 pitches, but I feel great," Olivares told The Associated Press afterward. "I settled down after the second inning. I was mad at myself, and it worked. I became a pitcher then. I had been a thrower."

That August, Olivares gave up eight hits and walked three over five innings, but still got the win. He also stranded 10. "He struggled big time," Cardinals Manager Joe Torre told The AP, "but he didn't throw up his hands and quit."

Olivares stayed with the Cardinals through 1994, then was released. He went through Colorado, Philadelphia and Detroit, before landing in Seattle mid-1997. He got his first win for Seattle in late July. It turned out to be his only win, he lost four down the stretch.

Returning to Oakland for 2000, Olivares finished out his career in 2001 with 45 appearances and 12 starts for Pittsburgh. He went 6-9 with a 6.55 ERA. He also returned in 2004 to pitch for Puerto Rico in the World Baseball Classic.

But in 1999, after his trade to Oakland, Olivares was trying to get the Athletics to the playoffs. He also beat Roger Clemens along the way.