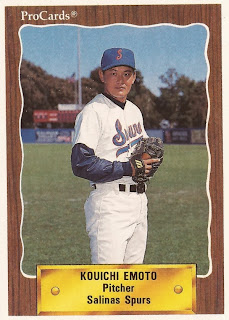 Koichi Emoto already had some good experience when he came to the United States in 1990.

He had time in three Nippon Professional Baseball seasons in Japan under his belt.

Loaned to the Salinas Spurs of the high-A California League for 1990, Emoto pitched well enough. But he didn't pitch well enough to continue his career in the United States, or for long in Japan.

Emoto's first recorded time in the pros came in 1987, with the Chunichi Dragons of the Japan Central League.

He signed with the Dragons after being taken in the fourth round of the 1984 draft, having graduated from Jogu High School in Japan. Emoto's name has also been spelled Kouichi Emoto, with the Japanese form of his name 江本晃一.

For 1990, Emoto moved to the Daiei Hawks in a trade. He also went to the United States and the minor leagues, provided on loan to Salinas. With Salinas, Emoto went 7-4 over 54 outings. His ERA came in a 3.07. He also picked up six saves.

His time with Salinas ended and Emoto returned to Japan. Under contract with the Daiei Hawks, Emoto's professional career appears to have ended in October 1991, with his release by Daiei.