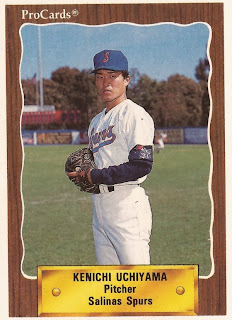 Kenichi Uchiyama's time as a closer for the independent Salinas Spurs in 1990 didn't go as well as he had likely hoped.

But Uchiyama did pitch well enough to return to Japan and pitch in Nippon Professional Baseball. He ended up getting credit for two seasons there, both with the Yakult Swallows. There, he picked up a single save.

Uchiyama's professional career began in 1985, taken by the Yakult Swallows in the third round of the Japanese draft, out of high school in Gunma Prefecture, according to his Japanese Wikipedia entry.

After signing with the Swallows, Uchiyama first made the first squad for Yakult in 1990. He also played that year in the United States, with the high-A Salinas Spurs in the California League. Ucyiyama and several other players from Japan, were sent on loan to the California club. Uchiyama was sent from the Swallows.

Uchiyama also returned to Japan in 1990, getting into a single game for Yakult, a start. In that game, he picked up just two outs and gave up five earned runs.

Once he made Yakult, Uchiyama became the first son to follow his father to the Japanese majors. His father Uchiyama Kazumi also played in NPB, getting time from 1958 to 1960 with the Chunchi Dragons, according to the Japanese Wikipedia.

For 1991, Uchiyama played for the Swallows again. This time he got into 11 games in relief. He also pitched better, giving up eight earned runs over 19.2 total innings for a 3.66 ERA.

Uchiyama stayed signed with the Swallows until November 1993, when he was released.