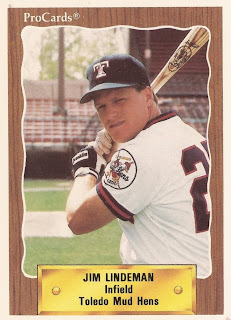 Jim Lindeman had been in the right place three years earlier, playing a crucial role in the St. Louis Cardinals' 1987 playoff run.

By 1990, though, Lindeman was still trying to secure a regular big league role, injuries and simple bad luck slowing him down, according to The Associated Press. He signed on that spring with the Tigers.

"This is what I was hoping for," Lindeman told The AP after going 3 for 4 in a late-spring game. "It's what I came to camp for. All I can do is show what I can do and hope for the best."

Lindeman made it to Detroit that year, but for just 12 games. It was a continuation of nine-consecutive seasons where Lindeman saw time in the majors. He never did, though, get back to the postseason.

Lindeman's career began in 1983, taken by the Cardinals in the first round of the draft, out of Bradley University in Illinois.

Lindeman played that first season at single-A St. Petersburg, hitting AA Arkansas in 1984, then AAA Louisville in 1986. It was also in 1986 that Lindeman made St. Louis, as a September call-up.

In 19 games for the Cardinals in 1986, Lindeman hit .255, with a home run. He returned to St. Louis in 1987, getting into 75 total games. His 1987 playing time was necessitated by injuries, namely to Cardinals slugger Jack Clark.

Lindeman had his own injures, but was healthy when it counted. Lindeman hit .208, with 8 home runs in the regular season. Once the postseason came, though, Lindeman turned it on. In 11 total games across the NLCS and the World Series, Lindeman hit .321.

Lindeman told The AP his postseason success came with playing time. That built his confidence.

"I'm not going to be out there hitting 900-foot home runs like Jack Clark," Lindeman told The AP. "I'm a line-drive hitter and a doubles hitter. My job is to drive in runs."

Traded to the Tigers for 1990, Lindeman got into his 12 games in Detroit. For 1991, he moved to the Phillies, getting into 65 games that year and 29 the next. All along, back injuries plagued him.

The injuries were back in 1992. By September, Lindeman was back, but in a pinch-hitting role.

"This was the first time I've been hurt in three years, so I'm just learning how to do this," Lindeman told The Philadelphia Daily News. "It takes a little experience to go around the league and learn how to come off the bench."

Lindeman played in two more seasons, nine games in 1993 for the Astros and 52 for the Mets in 1994, finishing out his big league career. His final major league game came the as the strike began.

Lindeman has since gone into teaching, at Rolling Meadows High School in Illinois. He serves as physical education teacher and varsity baseball coach, according to The Peoria Journal Star.

In 2012, Lindeman's Mustangs pulled out a dramatic win in one tournament game, rallying to a 6-4 win.

"We didn’t quit, they made some errors and we got some hits and pulled out a really good win," Lindeman told The Arlington Heights Daily Herald afterward. "It was fun."