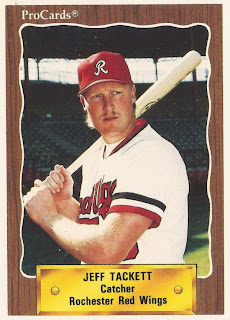 Jeff Tackett's father flew to Baltimore once to see him play, Tackett told The Associated Press in 1992. But Tackett didn't play in the games his father saw.

Then, in June 1992, the Orioles catcher was in the starting lineup against the Angels. He also called family and friends, including his father. They arrived and saw Tackett hit a home run.

"What a great night," Tackett told The AP after that game, "I wish it could last for a week."

While it couldn't last a week, Tackett's family and friends had other opportunities to see Tackett play over the next seasons. He played parts of four major league seasons in his career, his final game coming a week before the 1994 strike began.

Tackett's career began in 1984, taken by the Orioles in the second round of the draft out of high school. He played that year in rookie ball at Bluefield.

It was in 1991 that Tackett made his major league debut. Called up in September, Tackett got into six games, going 1 for 8. Tackett was behind the plate in a Sept. 22 loss to Cleveland, his pitch call leading to the game-winning double, The Baltimore Sun wrote.

Tackett returned for 65 games in 1992, hitting .240, with five home runs. Some of that time was spent filling in for the injured Chris Hoiles. With Hoiles' return in August, Tackett looked to be Hoiles' backup, The Sun wrote.

"I would feel secure no matter what I've done," Tackett told The Sun. "I feel good about what I've accomplished and I feel I've got some more to accomplish before the year is out."

While he was with Baltimore for much of 1993, He was used sparingly. The Sun noted in August that he batted just seven times that July.

"It's pretty tough to come off the bench like that," Tackett told The Sun after hitting in the winning run in the Aug. 2 game. "The key is to stay loose when you aren't playing and try not to get over-anxious when you get up there."

Tackett continued playing through 1997 at AAA, with the Tigers and Rangers organization, ending his career.

In August 1994, Tackett had already played what would be his final major league game when he spoke to The Sun about his father Terry Tackett and the influence his father, a former minor league player himself, had on his career.

"My father is very sports-oriented and loves the game of baseball," Tackett told The Sun. "But my parents never pushed me into anything. If I wanted to play baseball, I could play. That was fine with them. But they never pushed me. I've always just loved the game."