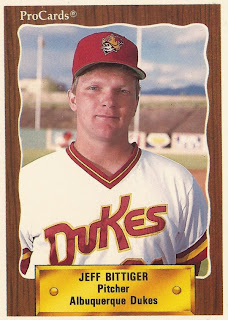 At five feet, 10 inches tall, Jeff Bittiger didn't exactly look the part. But, on Sept. 7, 1987, he certainly pitched the part.

As his Twins fought for the American League West, Bittiger went seven innings against the White Sox, giving up six hits and just one run.

"I'm pretty confident right now," Bittiger told The Associated Press after that game. "I just hope to get to start again in four or five days. I feel a part of a pennant race right now. When I got here Bert Blyleven asked if I was the new bat boy."

Bittiger didn't get to start again for the Twins, but he did go on to pitch parts of the next two seasons in the majors, for the team he beat that day, the White Sox.

In all, Bittiger got into parts of four major league seasons, a small part of a playing career that spanned more than two decades.

That career began in 1980, taken by the Mets in the seventh round of the draft, out of high school. He played that year at short-season Little Falls and the next at single-A Lynchburg and AA Jackson. That second year, Bittiger went 13-8, with a 3.39 ERA.

A one-time third baseman, Bittiger soon became a "strikeout artist," according to The AP, striking out 419 batters in 360 innings in his first three pro seasons. Bittiger He and Darryl Strawberry were invited that September to Shea Stadium, as among the club's top prospects.

With the Phillies that year, Bittiger started three games, going 1-1 with a 5.52 ERA. In the game where he got his first big league victory, Bittiger also hit his first home run.

In mid-June, Bittiger helped the White Sox to a 5-3 win, coming on to work out of a jam and striking out three. The one-time starter had turned reliever.

"I'm just trying to get used to the right way to warm up," Bittiger told The Chicago Tribune afterward. "I'm learning about situations and what I have to do."

Bittiger got into another two games in 1989, games that turned out to be his last in the majors. He went 0-1, giving up seven runs in 9.2 innings.

His stint was also cut short due to injury, a pulled right groin, according to The Tribune. He'd pulled it going too long in his first outing. Then he came back for another five innings a week later. That first outing, he went 4.2 innings to finish out the game.

"I felt a little in the ninth," Bittiger told The Tribune of that first outing. "I didn't feel like saying I didn't want to pitch the ninth because I just didn't think that would be the right thing to do."

Bittiger returned with the Dodgers at AAA Albuquerque in 1990 and pitched well, going 15-6. And he continued pitching, staying in affiliated ball through 1995. He then continued playing in independent ball through 2002. But he never returned to the majors.

After is playing career concluded, Bittiger served one year as pitching coach with Fargo, and he's served much of his time since as a scout with the Athletics. Among the players Bittiger signed was Andrew Bailey.

"I saw Andrew at Wagner College and the way the ball left his hand was special," Bittiger told The San Francisco Chronicle in 2009. "He was a guy I really wanted, because I knew he had a chance as a starter or a late-inning guy."