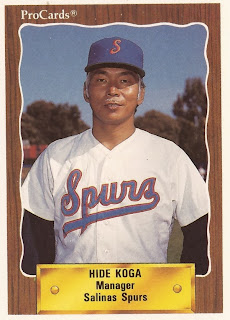 New Salinas Spurs manager Hide Koga had two separate lessons for his players in 1990, one for one group and one for another, Koga told The Associated Press that March.

Koga, a native of Japan himself, took on the unusual task that year of molding his independent entry into the California League into a team, bringing with him that large contingent from Japan.

Koga also brought with him nearly 30 years of experience in baseball, mostly in Japan, but also in the United States. Koga's career took him to the Japanese Nippon Professional Baseball with the Yomiuri Giants in the 1960s and then to the United States, for several years playing minor league baseball.

He later turned to coaching, including a long stint with the Daiei Hawks and then in the Japanese minor leagues.

Koga's career in baseball began in 1962, signed by Yomiuri out of Kinki University in Japan. At Kinki, Koga helped his team with the Japanese collegiate title, according to his ProCards card back. Koga is also known by his formal name, Hidehiko Koga, and 古賀英彦.

As a pro, Koga got four games with Yomiuri in 1962, then is credited with 15 games in 1963. By 1965, Koga was in the United States, playing in the minors for the San Francisco Giants. He also paid his own way, according to The AP.

Koga lost his 1967 season after an automobile accident, according to The Lodi News-Sentinel. But he returned for 1968, signing with the Cubs at single-A Lodi. In 28 outings, 5 starts, Koga posted an ERA of 4.25. In one August 1968 outing for Lodi, Koga set down three batters in a row, with the bases loaded.

Koga went on to play in Mexico and in Venezuela. By 1979, he was a coach with the Hawks back in Japan.

Then, in 1990, Koga became manager of the high-A Spurs. He brought with him six players from his Hawks team and two from the Yakult Swallows, according to The News-Sentinel.

That June, Koga spoke to The Los Angeles Times about the chances of one of his pitchers, Steve Maye, returning to affiliated ball.

"Steve has a decent fastball," Koga told The Times. "He doesn't throw too hard, but he knows how to pitch. His problem is control. He needs to keep the ball down to reach a higher level (in the minors)."

Koga stayed with Salinas for three seasons, through 1992. He then returned to Japan, but saw California again in 2001, as a coach for the Sonoma County Crushers.

In 2005, he served as manager of the Chiba Lotte Marines' Eastern League affiliate. For 2013, Koga is listed as the director of a club called the Tokyo Mets.

Back in April 1990, Koga compared his players' goals at Salinas with those he had for himself.