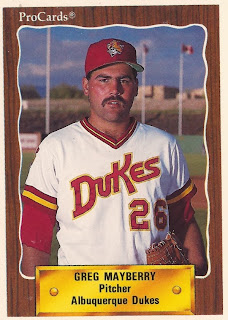 The bases loaded in the ninth of this spring game in 1990, the Dodgers called on reliever Greg Mayberry.

Up to bat was the Mets' Mike Marshall, who'd singled and tripled earlier. Mayberry got him to fly deep, but out, for a 5-4 Dodgers win.

"It shows you what the game is all about," Marshall told The Associated Press later. "I get up there with a chance to win it and even though I hit it hard, I ended the game."

Mayberry was going into his seventh season as a pro in 1990, a career that hadn't yet made the majors. Coming out of that spring training, Mayberry returned to the minors. It was his last season, his career ending without making the majors.

Mayberry's career began in 1984, taken by the Dodgers in the first round of the January draft out of Ferrum College.

He played that first year largely at rookie league Great Falls, going 7-5, with a 3.18 ERA in 14 starts.

Going into 1986, The Los Angeles Times referred to Mayberry as "highly regarded." That spring, he walked the bases loaded, but then got himself out of the inning, The Times wrote.

Mayberry, though, would play abbreviated seasons in both 1986 and 1987, starting three games for San Antonio in 1986 and getting into six for Albuquerque in 1987.

Mayberry's apparent struggles continued into 1988, back at single-A Vero Beach. He got into 13 games there, starting four.

He got back on track in 1989, playing again between San Antonio and Albuquerque. He went 12-10 between them, with a 4.27 ERA. That December, Mayberry was even thought of has having a chance to be taken by another team in the Rule 5 draft.

But Mayberry ended up staying with the Dodgers, playing 32 final outings at Albuquerque, ending his career.