Read the June 2015 interview: Dennis Burtt, Got There 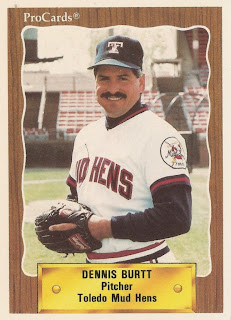 Then the optimism took a hit, as the Astros hit against him for six runs over three innings of work.

"I don't know what they (the Twins) are looking at," Burtt told The Sentinel after that poor outing, "what you do daily or overall. I'm just trying to do well . . . I'm getting the chance anyway.''

Burtt was coming off his first time in the majors the previous September, five outings, two starts. And he would make the team out of that spring in 1986, that poor outing notwithstanding.

But his stay with the Twins would be brief, ending that April with two more poor outings in games that counted.

Burtt's career began back in 1976, taken by the Red Sox in the second round of the January draft, out of Santa Ana College.

He started at short-season Elmira, then played his next three seasons at single-A Winter Haven. He made AA Bristol in 1980, then AAA Pawtucket in 1982.

Going into 1982, Red Sox manager Ralph Houk reacted to a solid game by Burtt and two other young Red Sox pitchers, telling The Associated Press that he was impressed with all three, with Burtt showing he could move the ball around and "had some strikeout ability."

"I wasn't really surprised because I'd had reports all winter that they were outstanding young pitchers," Houk told The AP. "They all looked pretty good today."

Britt, though, never saw Boston, staying with the Paw Sox through 1984.

In September, he was in the majors.

He debuted Sept. 4, getting into five games that month, with a total ERA of 3.81. In his debut, he was charged with three runs in just one inning of work. He picked up his first win in his second outing, again giving up three runs, but this time over eight innings.

After winning that spot with the Twins the next spring, Burtt went out April 10 for a scoreless inning. Two days later, though, he failed to record an out, getting charged with three earned runs. His third outing, which turned out to be his final one in the majors, Burtt gave up four earned runs in one inning.

"I'm not one of these guys who remembers every pitch he ever threw," Burtt told The Los Angeles Times in 1989, "But I think you remember the best and worst times. That was the major leagues for me. Being there was the best time I've ever had. Having to leave was the worst."

Burtt played out the year back at AAA Toledo. In July, he just missed a seven-inning no-hitter. Burtt went 9-10 on the season, and he didn't get called back to Minnesota.

Burtt moved to the Dodgers system for 1987, playing the next three seasons there, without seeing Los Angeles. He then signed with the Tigers for 1990, playing back at AAA Toledo.

Burtt went on to record two seasons as pitching coach at AA in the Red Sox system. He's also recorded in one final brief stint at independent Bend in 1996, finally ending his career.

In May 1990, he spoke with The Toledo Blade about his career, and how it was likely winding down, saying he hadn't given up on making it back to the majors, but he was realistic.

Read the June 2015 interview: Dennis Burtt, Got There