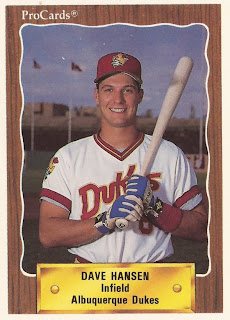 Dave Hansen tried to explain pinch hitting in 2012 as not exactly an art form, but a mindset, according to The Riverside Press-Enterprise.

"If you're going to have any success," Hansen told The Press-Enterprise, "you have to get a quality at-bat each time. You have to get locked in in one at-bat, not over four at-bats."

Hansen could talk. He still held the record for Dodgers pinch hits, The Press-Enterprise wrote. The other reason he could talk: Hansen is the Dodgers' hitting coach for 2012.

Hansen became a coach after a playing career that spanned two decades, and included time in 15 major league seasons and one in Japan.

Hansen's career began in 1986, taken by the Dodgers in the second round of the draft, out of Rowland High School in California.

He spent his first year at rookie Great Falls, then made AA San Antonio in 1989, then AAA Albuquerque in 1990. In September 1990, he debuted with the Dodgers in Los Angeles, getting into five games.

"I didn't think I hit it high enough to be a home run," Hansen told The Associated Press. "I really didn't think about it being my first homer until I got back to the dugout. It was like a sauna out there."

He played third just 18 times in 1993, but got into 84 total games. By the end of September, he had the Dodger record for pinch hits in a season, breaking a record set the previous year.

"I grew up in California. The Dodgers were my team," Hansen told The AP. "To be in the record books of an organization that has such a long history, I'll treasure that for a long time, whether it's broken soon or not."

Hansen played with the Dodgers 11 of his 15 big league seasons. His first stint with the team lasted through 1996, when he moved to the Cubs for 1997. After a year in Japan with Hanshin, Hansen returned to the Dodgers for 1999. Hansen split his final three seasons between the Padres and the Mariners.

With the Dodgers, Hansen still owns the team record for most pinch hits in a season, 18, and career, 110, according to his Dodger profile. He rejoined the Dodgers in 2011, as hitting coach, after time as minor league hitting coordinator with the Diamondbacks. For 2013, he served as hitting coach for the Mariners.