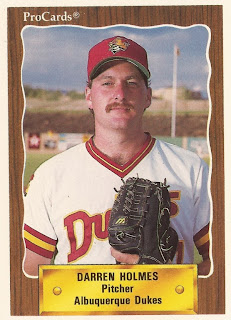 Coming off a 1993 season where he saved 25 games for the expansion Colorado Rockies, Darren Holmes started off slow in 1994. He blew his first two opportunities.

But Holmes told reporters he knew he could get back to his old form. He'd already proven he could do it.

"This is not the first time I've traveled down this road," Holmes told reporters, according to Tribune Media Services. "I battled back before and I'll keep battling back."

Holmes never did regain the form he had closing games for the Rockies in 1993. But he did battle back to become a consistent reliever, not throwing his last pitch until a decade later, playing through 2003.

Holmes' career began back in 1984, taken by the Dodgers in the 16th round, out of Roberson High in Asheville, NC. He didn't make it past single-A until 1988, when he pitched in two games for AAA Albuquerque.

Holmes returned to Albuquerque full time for 1990, going 12-2 in 56 relief appearances, with a 3.11 ERA. He also earned a September call-up to Los Angeles.

With the Dodgers, Holmes got into 14 games, giving up 10 earned runs in 17.1 innings. He also picked up a loss Sept. 19, giving up a grand slam. "It was a big game and we lost," Holmes told The Los Angeles Times, "that's all you can say. It's not a good feeling, getting a grand slam hit off you."

For 1991, the Dodgers traded Holmes to the Brewers. Holmes got into 40 games, with a 4.72 ERA that year. Going into 1991, though, Holmes had trouble in spring training giving up runs. Sent down to the minors, a Brewers pitching injury forced his return. Holmes quickly went 4.2 innings in relief and didn't give up a base runner.

"I couldn't dream of pitching any better than this," Holmes told The Associated Press after that April game. "Everything has fallen into place."

Holmes stayed with the Rockies through 1997, turning middle reliever in 1994. He did get 14 saves in 1995, but never got more than three his other three seasons.

In his final season with the Rockies, Holmes even got six starts, his first career start coming that April. He went six innings, giving up one run.

"It was kind of odd," Holmes told The AP after that first start. "Once I was out there, it wasn't like I was starting. It was like I was just coming into a ball game."

For 1998, Holmes signed with the Yankees, and got off to a troubled start. On April 10, Holmes gave up three earned runs without getting an out. It was an outing that drew the ire of George Steinbrenner, with The Boss saying they have to have good outings from Holmes.

"He's right," Holmes responded to The New York Daily News. "What am I going to say? I'm not getting the job done. I don't blame him. I'm not going to sit here making excuses for you right now. The balls that are hit aren't finding anyone."

By September, Holmes had returned to form. He'd also been on the disabled list for a month. A video of his delivery while he was out prompted Holmes to change his approach, The New York Times wrote in September.

He was also hoping to make the playoff roster. He didn't make it. Holmes went on to play through 2003, pitching on four different ball clubs. He made the playoffs with the Braves in 2002. By September 2003, Holmes was still impressing, despite two DL stints for shoulder problems.

"I never expected to do that," Holmes told MLB.com after striking out the side upon his return in September from on DL stint. "I just wanted to get in there, throw strikes and get back into a groove. I feel like I'm going to be fine."