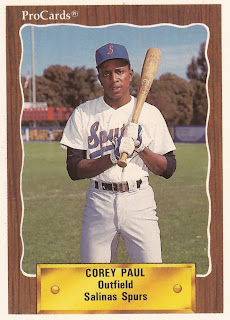 Corey Paul played in three professional seasons, never making it above high-A. Then he took some time off - four seasons off.

"Then they started up the (independent) Western League in 1995, and I told myself I had to try pro baseball again," Paul told The Japan Times years later. "I had always played ball as a kid; I was in three leagues and later played at Belmont High School in Los Angeles, so I couldn’t give it up."

And, with no major league experience, Paul made it, playing in the NPB in two seasons. He then didn't stop playing in one spot or another until 2005, seeing time in Korea, Mexico and back stateside in independent ball.

Paul's career in baseball began in 1987, taken by the Mariners in the 16th round of the draft out of Belmont High School in California.

For 1990, Paul moved to high-A Salinas, apparently still under control of the Mariners. There, his average improved little. He hit just .226, with four home runs.

Paul's time at Salinas, though, proved a precursor to things to come, with his eventual trip to Japan. That Salinas team was stocked with players from Japan and even had manager from Japan, Hide Koga.

To The San Francisco Chronicle that April, Paul spoke of the differences between the two baseball cultures.

"Their baseball customers and mannerisms are a little different," Paul told The Chronicle. "They really talk it up on the bench. They encourage the batter, the defense, everybody."

Then, in 1999, Paul moved to Japan and the Seibu Lions, spotted by Seibu scouts playing in Taiwan, according to The Times. He got into 59 games for the Lions that year, hitting .257. He then got into 47 the next, hitting .242.

He also played for the Lions' entry in the minor league Eastern League. With that Eastern League club, Paul won two-straight triple crowns, according to The Times.