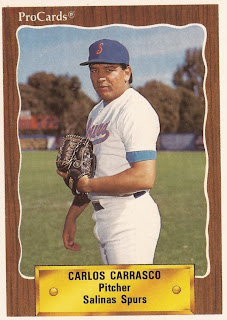 Carlos Carrasco was a home run away from the cycle in his July 1990 game, just the wrong cycle, according to The Modesto Bee.

Carrasco was the pitcher and in this game, Modesto hitters took Carrasco for a total of five singles, three doubles and a triple, according to The Bee. Carrasco didn't make it out of the fifth.

That outing was one of 25 starts Carrasco had for the high-A Salinas Spurs in 1990, his fourth season as a pro. He ended up going 5-14 on the year. He also ended up never making AA.

Carrasco's professional career began in 1986, taken by the Dodgers in the first round of the secondary phase of the June draft. He was selected out of Gavilan College in California.

With the Dodgers, Carrasco played his first season with rookie Great Falls. In 13 outings, 12 starts, Carrasco went 4-4, with a 3.36 ERA.

Carrasco then moved to independent teams. For 1989, he played at independent Reno, going 6-6, over 28 outings, 17 starts.