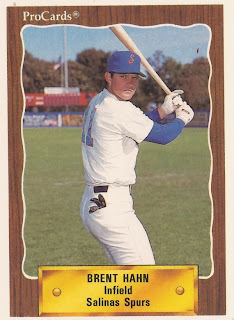 After the Salinas Spurs game, Brent Hahn's job and the job of some of his fellow Spurs hitters wasn't over, according to The Chicago Sun-Times.

For Hahn and those other hitters, there was still swing practice, a feature brought to the U.S. by his Japanese Spurs coaches.

"It was unbelievable, but I figured I needed the practice," Hahn told The Sun-Times' Dave Hoekstra in September 1990. "Otherwise, I wouldn't be here. Usually, you get back to the hotel and you kick back. They go out for a half hour to get that perfect swing. It did help."

If it helped, it helped Hahn bring his batting average up, to .221. It didn't help enough for him to continue his professional career. Hahn played just two seasons as a pro, the 1990 season his last.

Hahn's brief career began in 1989, signed by the independent Spurs out of Oregon State University. He'd been drafted earlier by the Twins in the sixth round of the January 1986 draft, but did not sign.

Hahn started in baseball early. He was the son of Don Hahn, who played in seven major league seasons, mainly with the Mets. Brent Hahn also spent his younger years in Oregon, taking his Little League team to the state championships in 1979.

In college, Hahn started with Arizona state, playing there for 1985, singling and scoring in a February game. He later went to Oregon State, getting a sacrifice fly in a May 1989 game, then picked up a single in a game later that month.