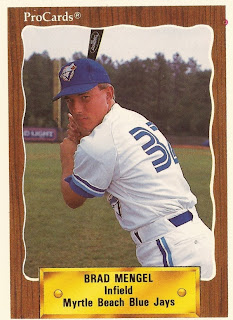 Cal State-Los Angeles' Brad Mengel got hits in 1989, enough to give him a .347 average and 40 RBIs on the year, according to The Los Angeles Times.

It was also enough for Mengel to make the all-conference first team, even with his team finishing fifth overall in the conference.

That performance was also enough for the Blue Jays to select Mengel in that June's draft. But it wasn't enough for a long career as a pro. Mengel's professional career lasted just four seasons, making it to AA, but no higher.

Mengel's pro career began that year with his selection by Toronto in the 43rd round of the draft out of Cal State L.A.

With the Blue Jays, Mengel signed by late-June and was assigned the club's rookie mini-camp. Soon, he arrived in the Pioneer League, at rookie Medicine Hat. He hit .238 there, over 42 games.

For 1990, Mengle moved to single-A Myrtle Beach, improving his average to .273. He also hit five home runs and knocked in 47.

He played 1991 at high-A Dunedin, winning league Player of the Week honors in early-June. It was a week in which he hit .429, picking up 12 hits, scoring 7 times and knocking in 10, according to The Orlando Sentinel.