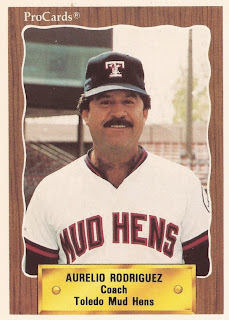 Nearing the end of his lengthy playing career in spring 1982, Aurelio Rodriguez found himself on a new team, the Blue Jays. He'd played for the Yankees the previous year, his 15th in the majors, getting a shot to appear in the Fall Classic.

Despite his advancing age, he still believed he could play a positive role on a club.

"I wanted to go to a team where I could play and contribute," Rodriguez told The St. Petersburg Times that March. "I will get that chance in Toronto and I am excited about playing here. I honestly feel I can give this organization 140 games this year."

Rodriguez came close. He got into 118 games, but not for Toronto. He played that year for the White Sox. One more year and his playing career was done.

Rodriguez went on to a post-playing career that included managing and coaching in the minors and in Mexico. He returned stateside in 2000, serving as coach of the rookie-league Missoula Osprey.

His return, however, along with his life, was cut short that September on a visit to Detroit. Walking on a sidewalk, a car jumped the curb, striking and killing him. He was 52.

A native of Mexico, Rodriguez' affiliated playing career started in 1966, purchased by the Angels from his Mexican League team.

He made the Angels the next September, getting into 29 games and hitting .238. He stayed with the Angels into 1970, before being traded to Washington. The Senators traded him again that October, to the Tigers.

It was with the Tigers, where Rodriguez found a home. Getting immediate notice from the third baseman's teammates was his glove. One even compared him favorably to Brooks Robinson. He also got a nickname, "Chi Chi," after the golfer.

"He runs better than Brooks and throws better," Tigers shortstop Eddie Brinkman told UPI that March. "Chi Chi could turn out to be a super player."

Rodriguez' glove came in handy many times over his nine-season career with the Tigers. In late July 1973, The Associated Press wrote it was a "defensive gem" that helped preserve a Tigers victory. Rodriguez fielded a ball in a dive, and threw to first in time for the out.

By the end of his Tigers career, it was still Rodriguez' glove that people were talking about. It wasn't so much his bat. In his years with the Tigers, he never hit higher than .265. That was in 1978. Also that year, Rodriguez made only four errors in 134 games.

In spring 1979, The Lakeland Ledger noted Rodriguez could have had a higher profile, and a higher bank account, if he could only have hit.

"Yes, I think about that many times," Rodriguez told The Ledger. "With all the money that's being given out now, I think it would have been good for my pocketbook."

It was in that series that Rodriguez got to go against fellow Mexican native, pitching phenom Fernando Valenzuela. Rodriguez got in to play after Nettles injured his thumb early on in the series. Of facing Valenzuela, Rodriguez told The AP it meant only one thing.

Rodriguez played his last game in 1983. He went on to manage in Mexico and coach in the minors. He spent part of 1990 as a coach for the Tigers at AAA Toledo. He was also credited as managing at short-season Niagara Falls.

The rest of the 1990s, Rodriguez managed back in Mexico, his final two seasons at Monclava. He didn't make the majors as a coach. In 2000, it was a coaching job with the Diamondbacks at short-season Missoula. Then, in September, came the car-pedestrian accident that killed him.

"We're all very, very saddened by this,'' Diamondbacks GM Joe Garagiola Jr. told The Arizona Daily Star after Rodriguez' death. "He wasn't in our organization a long time, but he had already made a big impact. It's a terrible loss, period, because he was a tremendous human being.''