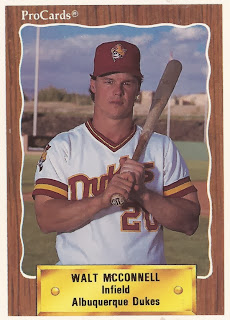 After the first 25 innings of scoreless ball, Walt McConnell told reporters the length of the game wasn't so much of an issue, it was just a matter of getting up and playing.

"You got tired, but not until you went to the bench between innings," McConnell told the AP after play was halted. "Then you bounce back up. You've got to."

McConnell bounced back up the next day, when the game resumed for the 26th inning. McConnell singled, was doubled to third and scored on another single to the cheers of the crowd for a 1-0 San Antonio win.

McConnell began his career three years earlier, taken by the Dodgers in the sixth round out of Georgia Tech. He spent that season at rookie-league Great Falls, posting a .412 average in 28 games.

At single-A Vero Beach in 1986, McConnell hit seven home runs with a .284 average, earning Florida State League Player of the Week honors in May.

In April, McConnell was credited by The Los Angeles Times with igniting a four-run rally with a double. One of McConnell's home runs came in a two-hit effort in August. The home run was described as a "tape-measure" shot over the right field scoreboard in Lakeland, according to The Lakeland Ledger.

McConnell made AA San Antonio in 1987, playing only 39 games and returning for 1988. He played in 93 games that year, missing time in late July, days after the 26-inning game, going down with an ankle injury, according to The Times.

McConnell joined AAA Albuquerque in 1989, spending the year between AAA and AA. He played 52 games at Albuquerque, hitting three home runs and batting .263. He returned in 1990 as both a player and a coach, according to the Colorado Springs Gazette. He got into 34 games, hitting .204.

In two more seasons, McConnell played for the other Los Angeles team, in the Angels system. He played 1991 at AA Midland, hitting .284 and seven home runs. He split 1992 between AA Midland and AAA Edmonton, but never made the majors.

In 1993, McConnell was inducted into the Georgia Tech baseball Hall of Fame.