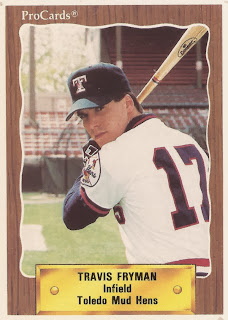 Trammell had the talent and he used that to be a great ballplayer, Anderson told The AP.

"He's going to hit 20 homers," Anderson told The AP of Fryman. "There's no stopping him from that, with his strength and fast hands."

Before Fryman's career was out, after 13 seasons in the majors, Fryman would hit 20 home runs or more seven times. He also made five All-Star teams, won a Silver Slugger and a Gold Glove.

The Gold Glove came in 2000, at third base, a position Fryman moved to early in his career from shortstop. The move was necessitated as the Tigers' shortstop position, aside from injuries, was already taken by the player Fryman reminded Anderson of, Alan Trammell.

Fryman's career began in 1987, taken by the Tigers in the first round out of high school in Pensacola, Fl. He played that year at rookie Bristol, hit AA London in 1989 and then AAA Toledo and Detroit in 1990.

He hit another 20 home runs in 1992, while knocking in another 96 runs. He also picked up his first All-Star nod. He also received praise later that month from Tiger brass for his hitting, and his work ethic.

"Travis Fryman is an example of what hard work can do," Tigers VP for player development and procurement Joe McDonald told The AP. "Travis simply made himself into a good hitter."

After another All-Star season in 1993, the Tigers moved to lock Fryman up long term, Tigers GM Jerry Walker telling The AP that Fryman was "one of the game's legitimate young superstars."

That 1993 season saw Fryman hit .300, with 22 home runs and 97 RBIs. With the new contract, came the expectations. Fryman, though, told The Orlando Sentinel he looked forward to the next game, not necessarily the next year.

"That's as far as I get," Fryman told The Sentinel. "To me, being a professional ballplayer is about developing your skills to a point where year in and year out, there are certain things you can count on."

Fryman continued developing those skills with the Tigers through 1997. His final two years with Detroit saw Fryman hit the 100 mark for RBIs each season.

For 1998, Fryman arrived with the Indians, by way of the Diamondbacks. In his first year with the Indians, Fryman hit .287, with a career-high 28 home runs. Starting 1999, Fryman went on an 11-19 run, including a three-run, game-winning home run in the Indians' home opener.

"When I hit it, I knew it had won the game for us," Fryman told reporters afterward. "I'll always remember this. There's nothing like winning on Opening Day in extra innings."

In June 2000, Fryman hit two home runs in one game. After hitting just 10, including that April game-winner, the year before, Fryman hit 22 for the Indians in 2000. He also picked up that Gold Glove.

By 2002, though, shoulder problems and declining numbers led to Fryman's retirement after 13 seasons.

"I've always considered myself a blue-collar type of player and an overachiever," Fryman told reporters after making his announcement. "I only hope that people thought I gave my best effort out there."

Since retiring, Fryman served three seasons as manager of the Indians' short-season club at Mahoning Valley, serving there from 2008 through 2010. For 2013, Fryman was a special assistant with the Indians.