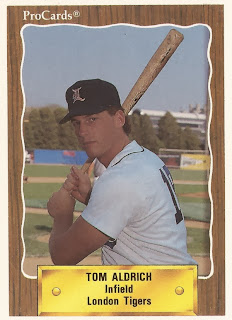 Starting his professional career at rookie Bristol in the Tigers organization in July 1988, Tom Aldrich looked back for The Lewiston Daily Sun on the moment the Tigers selected him weeks earlier.

"I was unbelievably excited," Aldrich told The Daily Sun. "That's all I could wish for. I just wanted a chance to play."

Aldrich got his chance to play, and he made it up to AA in his second season as a pro. His overall chance, though, didn't last. He ended up playing just three seasons as a pro.

Aldrich's career began that year in 1988, taken by the Tigers in the eighth round of the draft, out of Bowdoin College in Maine.

With Bowdoin, Aldrich played both baseball and hockey. In baseball, he was a home run hitter, owning the school's top three spots for home runs in a season, according to his school Hall of Honor profile. At the time of his graduation, he also owned the top four season spots for RBIs.

In April 1986, Aldrich hit three home runs in one game for Bowdoin. In April 1987, he hit two in one contest. In March 1987, Aldrich's coach Harvey Shapiro had nothing but good things to say to The Lewiston Journal about Aldrich.

"Tom Aldrich is a tremendous player," Shapiro told The Journal. "He helps the whole team when he's in the lineup, both at the plate and in the field."

Aldrich moved directly to AA London for 1989. His average, though, dropped to .228 over 113 contests. He hit a total of nine home runs, his seventh by early July, helping London to a win over Reading.