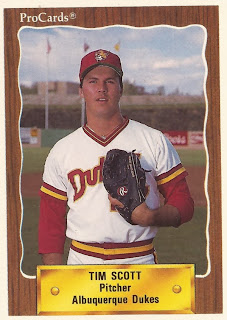 Tim Scott was selected for the all-star game in 1992, but he hoped he wouldn't be there, he told The Los Angeles Times.

His expected excuse? He was in the majors. The AAA contest would go on without him.

"I don't mind that a bit," Scott told The Times. "It was a big honor to make it. I've never made an all-star team before in my eight seasons, but I'll be happy to miss this one."

Scott was in as good a position to enjoy his time in the majors as good as anyone. In those eight seasons, Scott had only made the majors for the first time the year before.

Scott's time in the majors, though, continued through 1997, his playing career through 2002. His career with baseball has also gone on, as the coach for his old high school.

Scott's professional career began in 1984, taken by the Dodgers in the second round of the draft out of Hanford High in California. He spent that first year at rookie league Great Falls, moving to single-A Bakersfield in 1985.

Scott's major league debut came the next June, with the Padres. He'd signed with San Diego the previous off-season. He got two appearances, together totaling a single inning of work, giving up one earned run.

The next year, though, Scott got into more games. He got into 34, with a 5.26 ERA on the year. Some of Scott's worst outings were his early ones, with a 7.36 ERA in his first seven. Coming back in July after a trip to AAA, Scott worked to correct the problem, The Times wrote.

"I don't know if I'm trying to give (major league hitters) too much credit or what," Scott told The Times in July. "From now on, I'm going to go right after them and see what they can do."

But, despite that success, Scott suffered from shoulder problems, The Baltimore Sun wrote. Signing with his old team, the Padres, to start the year, he joined the Rockies in late May.

It was with the Rockies that Scott pitched his last game. Placed on waivers, he was claimed by the Mariners. But he suffered a sore elbow, never playing for Seattle, or in the majors, again.

Scott continued playing in the minors, in affiliated and independent ball, through 2002. By August 2002, Scott was serving as a player/coach with independent Solano.

Scott has since returned to his hometown, coaching the high school team that he once played for.

"You don't think about coaching during your playing days," Scott told The Hanford Sentinel in May 2011. "I get a thrill out of seeing the players progress and teaching them to play the right way. The fundamentals to the game don't change from the youth level to the major league level. And if we win, it's just a bonus."