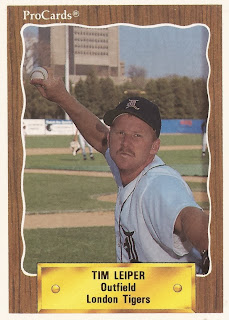 It was a long night for both Toledo and Scranton. They'd battled into the 16th inning tied at 5.

Then, with a single down the first base line, Tim Leiper ended that long August 1989 night. Leiper told The Toledo Blade last night he hit that single off a cut fastball.

"This is ridiculous. After a while, you get a little stir crazy," Leiper told The Blade. "When you go this long, you want to win. Absolutely, we're glad it was over."

While that was a long night and a long wait for Leiper and the Mud Hens that ended with a win, Leiper had his own long wait in the minors, one that never did end with the win of a call up to the majors.

Leiper's career began in 1985, signed by the Tigers as an undrafted free agent out of Brea-Olinda High School.

He played that first year between three teams, hitting .284 between them. He played his second year at single-A Lakeland, making AA Glens Falls in 1987.

In 1988, Leiper made AAA for the first time at Toledo, getting 22 games one step away from the majors. Leiper would go on to play each of the next two seasons between AA and AAA for the Tigers, never getting called up to Detroit.

He moved to the Mets system for 1991, the Royals for 1992, then the Pittsburgh system the next two years. But he never saw the majors.

Leiper went on to play in a total of 12 seasons, all in the minors. He saw time in seven of those seasons at AAA. He played his last recorded games in 1996.

His playing days over, Leiper has gone on to a long coaching career, also in the minors.

He began as hitting coach for AA Birmingham in 1996, the same year and team of his last recorded playing time. His first season as a manager came in 2000, at short-season Vermont.

Leiper then managed each year in the minors at one location or another through 2010, when he became a roving coordinator for the Marlins.For 2013, Leiper served as a senior adviser for player development with the Blue Jays.

Three of those seasons were spent as manager at AA Altoona in the Pirates system. He wasn't renewed for 2009, instead signing on with the Marlins at high-A Jupiter.

''I've done everything in minor league baseball; I've been very fortunate,'' Leiper told The Altoona Mirror upon his departure. ''I just want to be around good people who are working together with no egos who are really in it for the right reasons, who are in it for the players and to win championships in the big leagues.'
1990 CMC-Pro Cards Tally
Players/Coaches Featured:1,313
Made the Majors: 712 - 54.2%
Never Made Majors: 601-45.8%
5+ Seasons in the Majors: 308
10+ Seasons in the Minors: 182
Posted by Steve78 at 9:00 PM