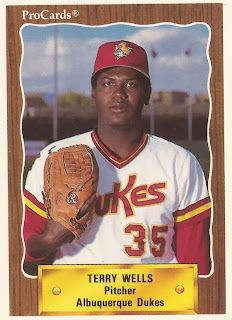 Terry Wells made it to AAA Tucson in 1989, his fourth season in the minors. But his success there was limited - five losses as a reliever and an ERA approaching 6 in a half season of work.

So, in spring 1990, the Astros chose to trade Wells to the Dodgers for Franklin Stubbs. Wells, according to The Houston Chronicle, welcomed the move.

"This is a good deal for me, to get a fresh start," Wells told The Chronicle. "This means somebody wants me. Nothing against the Astros, but I hope our paths cross again real soon."

With the Dodgers that year, Wells did get a fresh start. He also made the majors. But his time in the bigs was brief. Turned starter, Wells began five games. He went 1-2, marking the extent of his big league career.

Wells began with the Astros, taken in the eighth round of the 1985 draft, out of the University of Illinois.

He played his first year at short-season Auburn, moving to single-A Asheville in 1986. He made AA Columbus in 1988, getting his first extended look at relief. In 37 outings there, he posted a 4.57 ERA.

Wells continued relieving in 1989, splitting time between Columbus and AAA Tucson. Then he was traded.

With the Dodgers, Wells began the year at AAA Albuquerque, returning to a starting role. It was as a starter that Wells made Los Angeles, the team hoping he could fill the fifth slot in the rotation, The Los Angeles Times wrote.

He debuted July 3 against the Cubs. He went deep into the game, completing six innings. But he also gave up four earned runs and got the no-decision.

"I battled," Wells told The Times after his debut. "I didn't have good stuff--I only had one pitch today, my fastball. I don't feel too bad about it, I made some mistakes but I'm looking forward to the next time out there."

After a four-inning outing, where he gave up another four earned runs against the Pirates, Dodgers pitching coach Ron Perranoski told The Times there were no guarantees for Wells.

"I can't say what our plans are for him, and I can't say he's our fifth guy," Perranoski told The Times. "He's only been here two games. But this is his shot, it's what he makes of it."

Wells then went on to pick up his first, and what would be only, win July 16 against the Cardinals.He went 6.1 innings, giving up just one earned run. Wells got just two more starts, failing to make it out of the third in either of them.

Wells played out the year at Albuquerque and returned there for 1991. He then played in just two more seasons, in the Indians and the Rockies systems, ending his career at AAA.