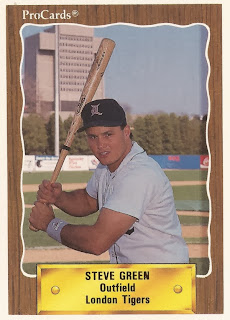 Green went 4 for 4 on the night, reaching base a fifth time, all helping the AA Tigers to a 10-3 win over the Reading Phillies, according to The Philadelphia Inquirer.

Green's season with London, though, was a brief one. He got into just 47 games. His career lasted just 35 games after that. He never made the majors.

Green's career began in 1987, taken by the Dodgers in the 18th round, out of Georgia Tech.

Green started 1989 at single-A Vero Beach, hitting .293 over 78 games. Then, in July, he was sent to the Tigers, traded with Domingo Michel for Billy Bean.

With the Tigers, Green played at single-A Lakeland, getting into 22 games and hitting .329.

For 1990, he made the move to AA London, getting into those 47 games and hitting just .238. It was as high up the baseball ladder as Green would get.