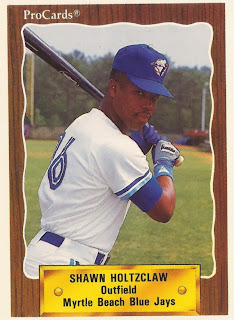 There was no score early in this 1990 contest between Myrtle Beach and Sumter. In the third inning, Shawn Holtzclaw took care of that, according to The Sumter Item.

With a runner on third, Holtzclaw smacked a single to left, plating the first run in a game Holtzclaw's Myrtle Beach Blue Jays would go on to win.

Holtzclaw was in his second season as a pro that year with Myrtle Beach. He would get into just two more, never making it to AA.

Holtzclaw's career began in 1989, taken by the Blue Jays in the 10th round of the draft, out of Auburn University.

With the Blue Jays, Holtzclaw started at rookie Medicine Hat. He hit .277 over 64 games, with four home runs and 40 RBIs. It was enough for Holtzclaw to be named to the league All-Star team.

Holtzclaw's final year in affiliated ball came in 1991, with 90 games at high-A Dunedin. He hit .245, with two home runs, ending his career with the Blue Jays. Holtzclaw is credited as coming back for 17 games with independent Duluth-Superior in 1993, ending his career.