The story behind this post: The story of Scott Miller(s) 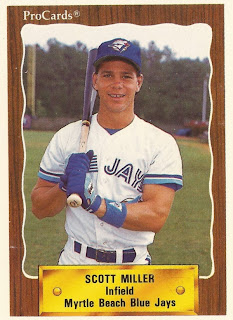 Sarasota Riverview High School's Scott Miller was heading off to college in 1985 and his coach was sorry to see him go, according to The Sarasota Herald-Tribune.

That's because of Miller's tenacity, helping the team to a state championship and continuing to practice later, even after breaking his wrist, according to The Herald-Tribune.

"I'm going to miss him," Miller's coach Larry Altier told The Herald-Tribune, "not only as an excellent ballplayer, but also as a person, too. He does things not everyone else does. He's special."

Miller went from there on to college, and to the pros. In his pro career, Miller lasted four seasons, never seeing AA.

Miller's pro career began in 1989, signed by the Blue Jays as an undrafted free agent out of the University of South Florida. He went to South Florida after first attending Manatee Community College, before that Riverview High School. Miller is also known by his full name, Steven Scott Miller.

At Riverview, Miller singled twice in an April 1984 game. From Riverview, Miller went to Manatee, picking up three hits in a January 1987 game. Miller also played well on defense at Manatee, still holding the best fielding percentage for a second baseman.

Miller then turned pro. With the Blue Jays, Miller started at rookie Medicine Hat. In 22 games, Miller hit .235, with one home run.

For 1990, Miller moved to single-A Myrtle Beach and high-A Dunedin, hitting .245 between them. With Myrtle Beach in May, Miller knocked in a run on a single.

Miller's 1991 season was abbreviated, just 50 games again between Myrtle Beach and Dunedin. He went 1 for 2 in a July game with Myrtle Beach, knocking in two and scoring once.

Miller's final season came in 1992 with 36 games played largely at Dunedin. His career was over by May 31, his hometown Herald-Tribune noting the game in his hometown was his final as a pro. He went 1 for 4.

By that July, Miller was back at Medicine Hat, serving as a first base coach, The Herald Tribune wrote. His coaching career, though, was brief. He's not listed as coaching beyond that season.