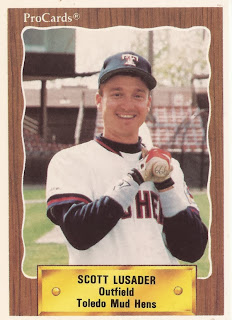 In the thick of a pennant race, Scott Lusader came through for his Tigers, both at the plate and in the field, The Los Angeles Times wrote.

Late in the game, Lusader robbed the Blue Jay hitter of extra bases with a diving catch, his team up 4-3. Earlier, he'd cut a three-run Blue Jay lead to one, with his first major league home run that just cleared the fence, The Times wrote.

"You dream about hitting a home run in a big game," Lusader told The Times of the earlier home run. "And you dream of going upper deck or over the roof with it. This one, I'll take it."

Lusader took it, helping his Tigers to the 1987 American League East crown. Lusader would go on to play in four more major league seasons, before his career was out. He would also hit four more home runs, perhaps none, though, bigger than that first.

Lusader made the majors in 1987, in just his third season of professional ball. He turned pro in 1985, taken by the Tigers in the sixth round of the draft, out of the University of Florida.

With the Tigers, Lusader played at single-A Lakeland, but als found himself that first year at AA Birmingham. Between the two, he hit .310 in 48 games.

Lusader went on to get into 23 games for the Tigers that September and early October, picking up 15 hits in 47 at bats. He also picked up that one important home run.

Coming back for 1988, Lusader was thought to have a good shot at making the team out of spring training. But he didn't go to winter ball and had a poor spring, The Associated Press wrote. He ended up starting the year at Toledo.

"You have to figure you've got a chance when you're on the roster," Lusader told The AP after being demoted. "Now, you just have to go to Toledo and play hard and see what happens."

Lusader made it back to Detroit that year, but for only 16 games. He got just one hit in 16 at bats. In 1989, Lusader got into 40 games, getting 103 at bats. He hit .252. He also had a nightmare inning in the field in September, committing three errors.

But, though it wasn't quite like that 1987 home run, in spring 1989, Lusader hit two home runs in one game. He hit them both off Orel Hershiser.

"I'm going to remember this day for a long, long time," Lusader told The AP after that spring performance. "Maybe forever."