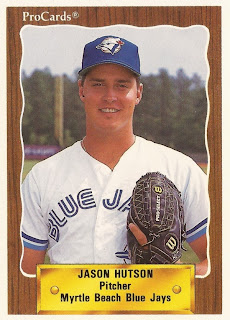 Scott Hutson got the quality start and both he and his Arizona State team got the win.

In this March 1987 game against Azusa Pacific, Hutson went six innings, giving up just two earned runs on seven hits. His Sun Devil team then went on to the 8-6 win.

Hutson ended up pitching well enough in college to be drafted into the pros. His professional career, though, didn't last. He got into just three seasons, never making it above single-A.

Hutson's pro career began in 1988, taken by the Blue Jays in the 30th round, out of Arizona State. Hutson, who was also credited by his given name Jason Hutson, was drafted twice before, by the Athletics and Twins out of Mesa Community College.

With the Blue Jays, Hutson started at rookie Medicine Hat. There, he got into 20 games in relief. He picked up two wins and one save. His ERA came in at 5.61.

Hutson also picked up two losses for Medicine Hat, one of them coming in a July game against Salt Lake.