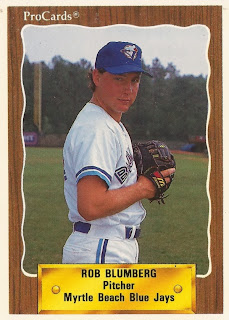 Rob Blumberg was a strikeout pitcher.

He topped 100 strikeouts in each of his first three seasons as a pro. That included his first year where he struck out 106 hitters in just 97.2 innings of work.

In his fourth season, though, Blumberg was done, his career coming to an abrupt end. He got just five outings that final year, five strikeouts, ending his career.

Blumberg's career began in 1989, taken by the Blue Jays in the 14th round, out of Nicholls State in Louisiana. At Nicholls, Blumberg led his team with 60 strikeouts in 1988.

With the Blue Jays, Blumberg started at short-season St. Catharines, moving to AA Knoxville for two starts. Between them, he posted a 2.30 ERA. He also got those 106 strikeouts.

The Blue Jays traded Blumberg to the Orioles for 1991 and he kept up the strikeouts. Playing between single-A Kane County and high-A Frederick, Blumberg set down 124 on strikes over 156.2 innings.

That June, Blumberg picked up the win in a 21-1 Frederick victory over Prince Williams. In August, Blumberg was the winner in a closer contest, one where Frederick won 4-1.

Then came Blumberg's final season, one where he got into those last five games, ending his career.

Blumberg has since gone on to stay in the game, though in a different area. He's served for several years a youth coach in softball, heading the Pinellas Warriors 16U in Florida.