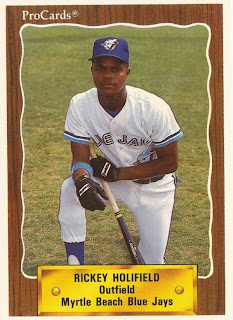 Rickey Holifield played in the Arizona Fall League after his seventh professional season. He'd made AAA briefly in that seventh season, but he hadn't made the majors.

But he knew he had to play in the fall league, and play well, if he was going to get his shot, he told The Reading Eagle.

"It's a steppingstone," Holifield told The Eagle of the fall league. " Next is taking the same level of intensity - or turning it up a notch - and playing at the major league level. That's where I want to be."

Holifield ended up playing a dozen years as a pro. He never took that last step to the majors.

Holifield's career began in 1988, taken by the Blue Jays in the 21st round of the draft, out of Ganesha High School in California.

With the Blue Jays, Holifield started with rookie Medicine Hat, hitting .271 over 31 games. He moved to short-season St. Catharines for 1989 and then single-A Myrtle Beach for 1990.

Holifield moved to high-A Dunedin for 1993. He then made AA Knoxville for 1994. The Blue Jays then placed him on waivers and the Phillies picked him up.

With the Phillies, Holifield played out the year at AA Reading. He also got his first brief look at AAA Scranton. In an August game for Reading, Holifield hit a solo home run, one of 11 he hit on the year.

In 1998, Holifield also saw time in independent ball at Allentown. For 1999, it was independent Bridgeport, after spending the spring with the Cardinals. It was his last season as a pro.

That July, just after signing with Bridgeport, started off in a bit of a slump, then went 3 for 4, scoring twice and knocking in two in a game, according to The Norwalk Hour.