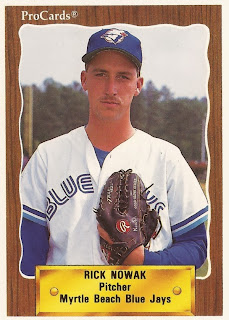 Rick Nowak and his teammates got some good advice in 1987, from both his coaches and visiting coaches.

Among the visitors was Texas Rangers pitching coach Tom House and former major leaguer Warren Brusstar, according to The Los Angeles Times.

"They've shown me things I've never seen before," Nowak told The Times that May. "Before, I was just throwing the ball."

Nowak eventually took what he learned from his coaches and turned pro. But, whatever he learned, he couldn't turn it into a long pro career. Nowak's professional career consisted of parts of just two seasons.

Nowak's professional career began in 1988, taken by the Blue Jays in the 26th round out of the University of California-San Diego.

At UC-San Diego, Nowak had success even before seeing those coaches. In April 1986, as a freshman, Nowak struck out seven as he threw a no-hitter. The next March, he did it again. Nowak threw his second no-hitter in a 2-0 win.

Then, in April 1988, Nowak achieved another pitching feat. He struck out 18 in one game, all while giving up just four hits, according to The Times.

With the Blue Jays, Nowak played his first year between rookie Medicine Hat and short-season St. Catharines. He got into 16 games, 15 starts. Overall, he went 3-8, with a 3.03 ERA.

That July, Nowak shut out Salt Lake for five innings before getting pulled. In August, Nowak went six innings, giving up just four hits and no runs, but got pulled after reaching his pitch limit.

Nowak isn't recorded as playing in 1989, but he returned to the field for 1990, at single-A Myrtle Beach. With Myrtle Beach, Nowak got five starts, posting a 2.33 ERA. Those starts also ended his career.

Nowak has since gone on to a new career in entertainment. Nowak is listed as the chief operating officer for a California-based production, creative marketing and talent management company called New Wave Entertainment.
1990 CMC-Pro Cards Tally
Players/Coaches Featured:1,346
Made the Majors: 720 - 53.5%
Never Made Majors: 626-46.5%-X
5+ Seasons in the Majors: 312
10+ Seasons in the Minors: 185
Posted by Steve78 at 9:00 PM